Being Gay in an African Community

Like most queer people —especially in Africa —22-year-old Ndumiso Sibindi was disowned by his family when he decided to come out publicly as gay. He turned to TikTok to highlight the kind of injustices and hostility they often receive across different spheres, including from their families. He hopes to raise awareness against discrimination based on sexual orientation.

Ndoyisile Ndumiso Sibindi is a content creator and fashionista with more than 200,000 followers and an impressive three million likes, and counting, on the popular social media platform TikTok. The South African-based Tik-Toker is known for his comic skits about queer people. He is committed to reaching more people across the continent in his quest to call for a safe space for the queer community. ‘I had to come to South Africa because —unlike Zimbabwe where homosexuality was criminalized —they have safe spaces for LGBTQ+ communities. Unfortunately, they also have numerous cases of queer people being violently attacked and killed,’ he says.

‘I am the firstborn in a family of three. I was born and brought up in Habane Township, Bulawayo in Zimbabwe. I spent the better part of my childhood with my grandmother, though I would stay with my mum once in a while. I grew up in a more feminine environment with my siblings and two custodians, while most of my friends were girls to whom I related more than I did my fellow boys. I started schooling at Mvuthu Primary School, and later joined Mvuthu High School for my higher education.’

‘As a child, I used to play with dolls as opposed to toy cars as is expected of many male children,’ he continues. This was his lifestyle and according to him, his family never had any issue with it.

However, things changed when he joined Lupane State University for a Bachelor’s Degree in Sociology. ‘When the students learnt about my sexuality, all hell broke loose. They began cyberbullying me, something which affected me. At the same time, my mum was struggling to pay my tuition fee at the University. For two years, I struggled to survive in an unfriendly environment so when my mum couldn’t afford to pay my fee anymore, I chose to drop out, which was a huge relief for me since I was now free from the bullying,’ he narrates

Forced to fend for himself, he moved to Johannesburg and joined his cousin. South Africa’s post-apartheid constitution was the first in the world to outlaw discrimination based on sexual orientation, becoming the fifth country in the world to legalize same-sex marriage. To date, it is the only African country to have done so. Despite these progressive laws, a spate of killings has left the queer community reeling. ‘The laws only exist on paper, you only feel safe as a queer person if you are rich. I have been to queer-only clubs which are only located in rich neighbourhoods. Since I moved here, I have witnessed several killings in the ghetto targeting members of the LGBTQ+ community’ he states.

‘Would it be easy for one to live a lifestyle that is akin to a death sentence?’ he asks rhetorically. ‘I was born in a homophobic country. I didn’t choose to be who I am, I was born this way. I cannot live in pretence. I cannot change and I wonder why society can’t just accept us for who we are,’ he adds.

‘I openly came out as gay in 2020 while in South Africa and was shocked at my family’s reaction; they disowned me. It was hard to comprehend whether or not they were aware of who I was all along, or they were but never wanted it to go public. I had never faced any discrimination or hostility from them before I went public. It is through this experience that I began doing skits on TikTok to raise awareness of the queer community.’ 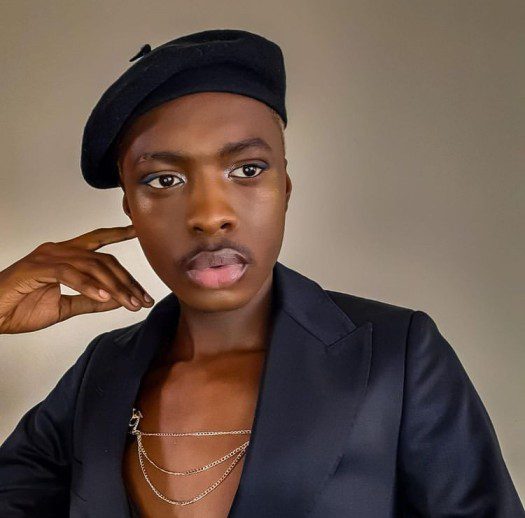 Striving to be Independent

Getting employed in a foreign country proved to be an uphill task for him. ‘I wanted to be financially stable since my family had stopped supporting me. I had seen how some queer people I know were discriminated against in working environments, especially public institutions, and knew I wouldn’t be the exception. I opted to fain sewing skills to try my luck in the fashion industry since I had begun modelling.’

According to Ndoyisile, many queer people travel abroad to countries like Germany or Netherlands where their safety and lives are respected. They take with them their skills and knowledge leading to those countries developing more, instead of their own. ‘When people are employed, they are hired for what they can do, not who they are or whom they love. I have never understood why this should be an issue when it comes to employment,’ he wonders.

Ndoyisile profile has grown tremendously since then, with his baby steps in the fashion industry giving birth to a fashion line, By-Ndoyisile. It is a career that he is proud of since it helped him gain the financial independence he had long yearned for.

‘Only come out as gay when you know you are financially independent because you will definitely be disowned,’ he says sarcastically in one of his TikTok posts that went viral.