We are human beings, not robots’

Cleopatra Kambugu made two very bold decisions that not only changed her life but also made history. She came out as a transgender, then went a step further and got legally recognised, the first one in Uganda. She admits that the journey is far from over and encourages her fellow trans people to come out proudly and accept themselves for who they are. Only then will society do the same.

We decided to meet at a beautiful spot in Kampala for a one-on-one interaction about her life as a transgender woman. She certainly stands out with her admirable sense of fashion; a maroon velvet bandage dress (knee level), with a leather jacket to match, white sneakers, a little posh nude bag and navy blue headsets. Her white braids lay on the side of her shoulder. She has a beautiful bright smile that is warm and gentle.

As an intelligent transgender woman, Cleo says the beauty of her story is that people always have assumptions about the genesis; it is either she ‘learnt it’ somewhere, went to a single-sex school, or it is family-related. On the contrary —she tells me —the first time she travelled to a foreign land was in her 20s, has attended mixed-sex day schools all her life, and was raised in a home with both parents who were always present.

The 36-year-old is the first transgender in Uganda to be recognised by the government when she received her passport and national ID, reflecting her new gender. She was born Caesar, after the Roman Emperor, but felt the need to change her name to Cleopatra when she transitioned. ‘Cleopatra had an interesting love life. She was Caesar’s lover who led Egypt as Pharaoh at a time when that was unheard of.

‘In my opinion, she is one of Africa’s most renowned feminists after Nefertiti. Many speak about her sexuality but forget how she stopped the Roman conquest of her people and laid her life in service to her people. We do not speak enough about Africa’s ‘she-roes’ in our ‘his-story’ books. This is why it is important that as transwomen our presence is not trivialized. We can learn from our past on how to paint a fairer, just, and inclusive feminist presence.’ 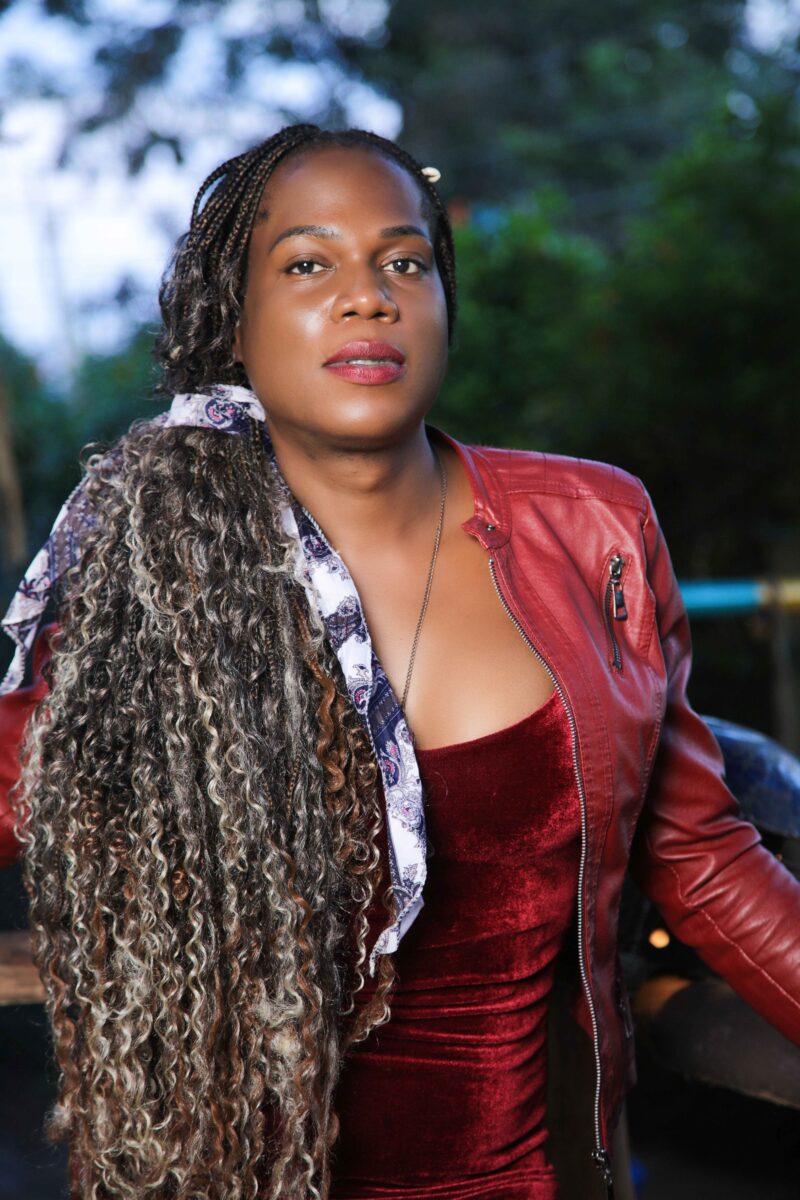 Raised and schooled in Uganda, Cleo understands her culture and language very well. She speaks fluent Luganda, Swahili, English, French, and a bit of Rutooro, among many others. She studied Molecular Biology and Genetics at Makerere University and at the time of discontinuation, had a CGPA of 4.99 out of 5. Her interest in biological sciences arose out of the need to understand her origin and that of life. She was awarded a World Bank Scholarship to conduct research in the Molecular Virology of the Cassava Mosaic Disease, which undermines the production of the key food security crop.

After making her contribution to the field of research, her studies were discontinued when she woke up one morning to find her face in a then-popular tabloid, The Red Pepper. She believes if she had continued with her studies, she would have contributed more to Uganda’s fight against COVID-19 and Ebola, both of which she had a keen interest in. She spent the past eight years convincing people that she exists, not as behaviour but as biological which deserves to be recognised. She had to choose between keeping it a secret and staying unhappy or choosing happiness by going public but losing her friends, family, and education.

‘I still have most of my longtime friends and family, whom I thank for accepting me for who I am because there is a stigma in having any form of association with a transgender person.’ She continues to keep in touch with some of her university colleagues who believe the country lost an intelligent person because it could not accept and accommodate a trans person.

She insists that they are not robots but human beings like everyone else so people should come to terms with the fact that they exist. ‘The question is, can we live with each other? People don’t have to understand how you have sex for them to appreciate you. We should have a society that is accepting of more diverse people, not just a few, which is the problem with the world today. My concern is that it is society that loses when we deny people the chance to be themselves and apply their knowledge.

‘Most queer people are not allowed to display their true potential and prove that they are more than just their gender or sexual preference,’ she states. She asked her mother, who was born during the Second World War, how it felt like when it started. Her mother recalled how people started hating each other as intolerance grew, just like now. That hatred has never been dealt with and is guised as simple standup comedy and jokes on social media which might seem harmless, but could morph into something worse. When they point this out, they are labelled petty and egocentric. 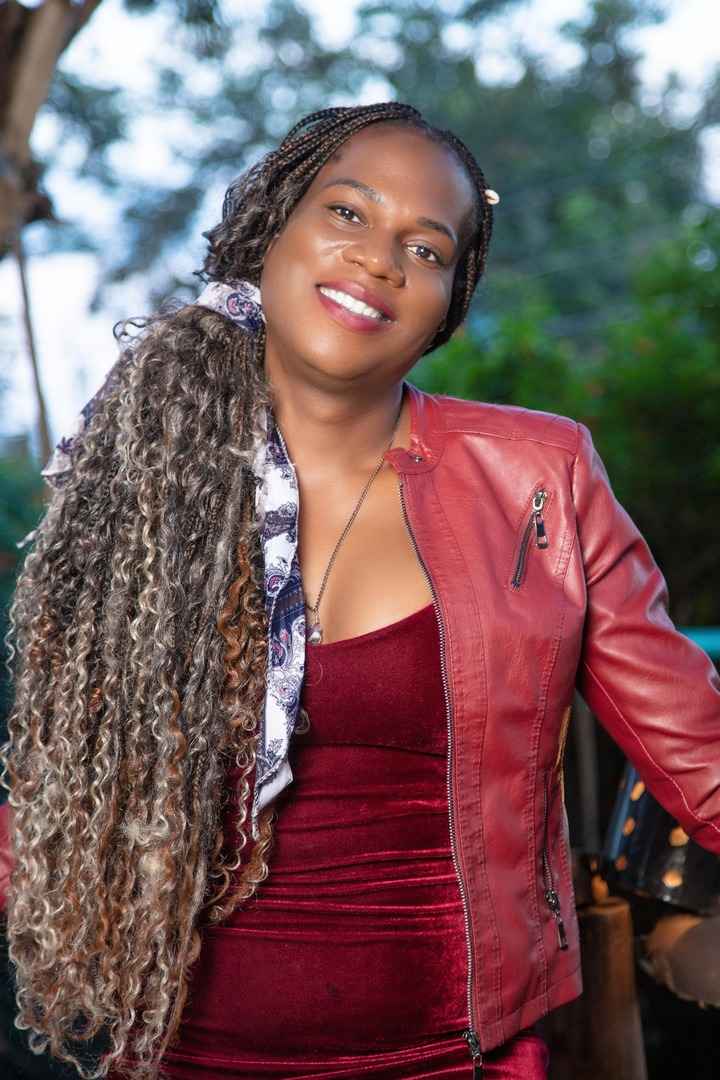 She believes the binary male-female gender system is obsolete. It renounces others while rationing and limiting their access to certain spaces, creating separate ones for people like us in the name of ‘protecting people.’ ‘For example, in our homes, we have common toilets but no cases of sexual violence because of sharing them. Is there a need to separate men and women when it comes to public places as if we can’t tolerate each other, yet we live with people of different genders in our homes?’

What puzzles her is how some people perceive trans people as perverts and rapists, and wonders where the correlation arose from. ‘Do they honestly believe that we have to force ourselves onto others to get sexual gratification?’ she asks. She believes part of the issue with any form of gender-based violence is the belief that you are deserving of violence and undeserving of love and care.

‘If women knew their worth and value, they will never be mistreated by anyone or anything that makes them feel less important. I am at a point where I have come to appreciate myself more, and it is not pride, I just can’t let anyone question either my womanhood or origin.’ She admires Princess Bagaaya of the Toro Kingdom for paving the way for people like her when she acted in the Hollywood movie Sheena.

‘I felt so happy watching her. She was very futuristic and liberal for her time. She was forward-thinking in how she expressed and pushed herself by acting in movies where princesses couldn’t. She dressed in what she felt was comfortable, not as was demanded of a royal. She exemplified the phrase don’t think outside the box, kick the box out of the way.’

She advises all trans people to know themselves enough so that the validation they seek doesn’t come from anywhere else but from within. That is why she doesn’t walk around in a white lab coat for people to know she studied medicine. ‘I am more than just my books and gender. To know me, you need to read the whole book, not just the cover.’

Since many people in the LGBTQ+ community are afraid of using the right means to get recognised, Cleo decided to follow the due process to the end. She met and spoke to the Commissioner, explaining her case in detail, and then submitted all the required documents for review. After twenty-one days she was given an expedited passport, which is what she had asked for, to go to work.

She went through the same procedure when it came to her National Identity Card. She carried the medical documents that had her medical procedure and was ready for scrutiny. Luckily, she was never subjected to any physical examination, which was very respectful, though her documents were given a thorough review. Having legally changed her gender, her ID now reads female after she swore an affidavit.

She reveals that being transgender gave her an open template to define herself. She thinks that most trans people, out of fear, have never actually said ‘let me go and have this conversation with my government.’ She admits that being the first was like a crown of thorns since it is not a first that was celebrated.

Cleo is at a point in her life where she is comfortable in her skin and with her life choices. She is open to the right person who feels they can ‘handle (her) awesomeness’ and are confident in their masculinity and not intimidated by hers. ‘If something doesn’t make sense to you, leave. You have nothing to lose and no one to impress. Don’t get married because women should get married; no one is concerned about your marriage situation.’

She feels super proud that she has experienced two genders. She has had the privilege of walking in dark places knowing that she can’t get raped due to her then-male privilege, and now she is scared because of the same. She now understands why women say walking at night is unsafe since she has to communicate with her loved ones whenever she leaves the house after dark. And just like any other woman, she also requires an accurate diagnosis when she goes for an OB/GYN in any reproductive health care programme because she suffers the same things that they do.

Her call is to attain diversity through having honest conversations instead of biased, moralistic arguments about people’s lives and futures. Conversations on how we can rebuild our country regardless of who we are and where we come from. People should appreciate and accept each other for who they are, emphasising the potential that the LGBTQ+ community holds.

Cleopatra Kambugu made history as the first transgender person to be recognized by the Ugandan Government. She is a human rights activist advocating for equality and social justice for sexual and gender minorities. She is the Director of Programmes at Uhai Eashri, Africa’s first indigenous fund operating in seven countries which supports the rights of sex workers and sexual and gender minorities. She has been recognised for her advocacy and was featured in The Pearl of Africa, an award-winning feature documentary that talks about her journey of transition, and work as a Ugandan LGBTQ+ activist.

UHAI EASHRI is part of the Love Alliance, a partnership that is based on an unwavering commitment to protecting, promoting and fulfilling sexual and reproductive rights globally, unfying people who use drugs, sex workers, and LGBTQ+ movements, and amplifying the diversity of voices in these communities.