As far-fetched as this might sound, sanitary towels are still a rare commodity to some girls. Coming from poor backgrounds, these girls will end up missing school during that time of the month due to lack of these basic commodities. But thanks to campaigns like ‘Nasimama na Wao’ (I Stand With Them) led by the young Ramlah Ramadhan from Tanzania, such situations are slowly becoming a thing of the past.

My passion for telling untold stories takes me to Tanzania. A very unique country in East Africa when it comes to spoken language. Here, in the streets you will rarely hear a person speak in their native language, they all speak Swahili. It is also the largest country in East Africa in terms of size with very beautiful tourist attractions. Ramlah Ramadhan, a soft spoken but brave young woman who hails from Dar es Salaam is the sole reason I’m here.

“My name is Ramlah Ramadhan. I am 26 years old, a women rights activist, public health specialist and a big advocate for the rights of communities and girls.  I’m also a youth agenda champion and was among the 11 Tanzanian youth who drafted the Youth Manifesto 2020 to 2025. In the manifesto we were demanding for a youth council in Tanzania. On top of that, our other priorities were, youth and education, youth and work, youth and health, youth and leadership, and youth and information. I have also been a volunteer teacher for form four students in some government schools. Furthermore, I’ve also championed for several campaigns for girls’ rights in Tanzania. At the moment, I’m running a campaign dubbed ‘nasimama na wao’ (I stand with them) #NasimamaNaWao,” she said.

“I have been working both in Mkuranga district in the coastal region of Tanzania and Mkinga District in Tanga. My campaigns are mostly online in spite of the numerous challenges that civil societies in Tanzania face. I believe challenges are not obstacles, they’re a war that you must fight and win. In 2015 Tanzania was infamously known for violations of human rights. Many human rights activists were arrested by the government of the late President Pombe Magufuli. We faced a lot of difficulties like the introduction of registration and licensing fees for a person to run an online television or have a YouTube channel.”

“Even activists found themselves in a difficult position because it was assumed that they were against the government. Through my online campaigns on Twitter and Instagram, I’m able to seek for support and fundraise. When I get the funds, I always implement the project it was meant for. At the moment there is a new regime and with each having its own policies and strategies, we are patiently waiting to see if things will change or not,” she told me.

The Nasimama Na Wao Campaign (I Stand With Them)

Ramlah has been at the forefront of several campaigns in Tanzania, the most recent one being ‘nasimama na wao.’ She is leading it in Mkuranga and Mkinga districts, telling me that the title of any campaign matters a lot.

“If you want to educate the community or pass a message, you must look for words that are appealing. For instance, in nasimama na wao, people will be asking who these people are. Why are you standing with them and why?” she said. “When such questions are raised, you can now explain by giving reference. I was prompted to start this campaign when we did a research and found that girls were selling their bodies for pads, though I mostly fundraise for reusable sanitary towels.”

“We need to keep girls in school so they can prosper like their male counterpart. We have equal rights for both genders, though at times it gets difficult for girls because they run the risk of missing some classes each month if they don’t have pads,” she told me with a sad face.

Due to the numerous campaigns she has been involved in, she’s grown a thick skin such that when I ask her about the challenges she is facing currently, she simply laughs.

“This isn’t my first campaign, having previously been involved in ‘Elimu bila ubaguzi na arudi shule.’ Last year we were advocating for girls who had gotten pregnant to be re-admitted back to school. If they get pregnant, after giving birth we want them to go back to school. I have never encountered such kind rejection from the community coupled with abuse from the elderly. I felt terrible but I had to keep fighting. There is nothing as bad as being cursed by the elderly. In my country, it’s considered a crime if you get pregnant while still in school. Society brands you a pariah.” 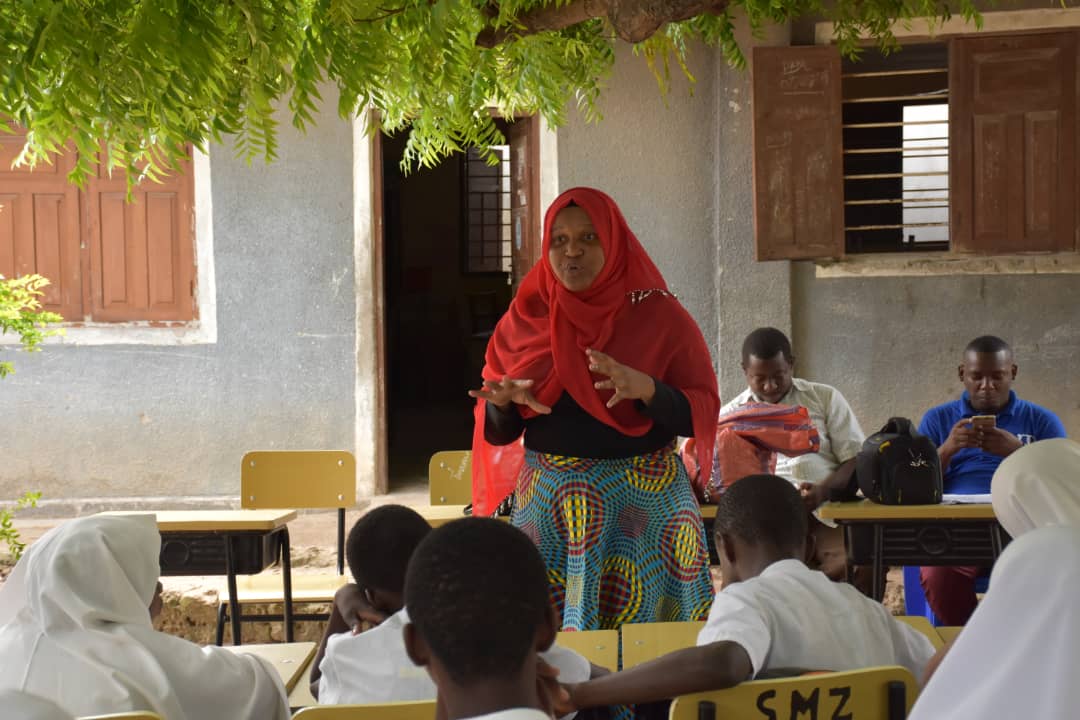 “I remember at the time they were telling us we are wasting our time since it was the girl’s decision to get pregnant. The discrimination was real, with some telling us to our faces that the government shouldn’t educate someone who has given birth. Unknown to them, some were as a result of rape, with others forced into the hands of preying men due to the various challenges they were facing in their homes.”

“It was like the government was removing money from their pockets, forgetting that it’s our taxes that would do the work. Some people thought we were abnormal. Questions like, how can you campaign for girls who got pregnant to go to school? Why are you staying online for long hours looking for supporters of your campaign? Others told us we were women and belonged in the kitchen. The big lesson I learnt during that time is to always stay focused on whatever you’re doing, regardless of the obstacles,” she said with a brave face.

“I can proudly say opportunities are there and we hope more will come. Donors were not interested in doing anything in Tanzania though now they have accepted to fund organizations. They were hesitant because of the numerous cases of human rights violations, but now you can send a proposal and they will consider it. H.E the President Madam Suluhu in her address to the 14th parliament spoke about water projects. She asked the Ministry of Water and Sanitation to work hard and ensure equality in access to clean and safe water. This is a win for us as we need clean water during our monthly periods.”

As Tanzanians we are proud of our country. We are collaborating very well, though there are still challenges. We have already come up with strategies on how to overcome them and move forward. We don’t want to dwell on the past and are starting afresh. We have the power and we believe that we will achieve the sustainable development goals. We believe, that is why we are beginning to do what we can, and at the end of the day we will become what we want, the triple ‘B’. Believe. Begin. Become.