Covid-19 response must be feminist and human rights centered, writes Rachael Mwikali in her first article for Vice Versa Global. In a bid to mitigate its spread, the government’s strategy has not only infringed on basic human rights, but it’s also discriminatory against women and girls. It should look at some of the best practices being carried out in the local communities that have ensured gender justice strategies that protects all regardless of gender. 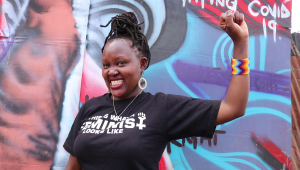 On March 11 2020, the World Health Organization officially declared the outbreak of the virus, Covid-19, a pandemic. The virus, which was first reported in December 2019 in Wuhan China, was spreading globally at an alarming rate. This pushed WHO to call for governments to take urgent and rapid action in managing its spread.

The Government of Kenya announced its first case of the virus in the country on the 12th of March, 2020. All learning institutions were immediately instructed to close while the working population was advised to work from home, with the exception of essential workers. The government also emphasized on the need to practice social distancing. This is something that was and still remains a challenge for most people, more so those who reside in informal settlements. They also urged the masses to frequently wash their hands with soap and running water, wear face masks while in the outdoors and to also sanitize. All these measures were introduced and enforced to help manage the spread of Covid-19.

The One Shoe Fits All Approach

However, these measures aren’t practical when it comes to dwellers of informal settlements, where access to clean running water is still a big challenge; the overcrowding also makes social distancing difficult to implement. The enforcement of curfew and lockdown protocol has also been a major challenge for communities residing in such areas, particularly for the women and girls. The curfews and cessation of movement orders are usually issued without any prior warning, often leaving some people locked in other counties, a loss of livelihood for others, and a restricted and hectic movement pattern for those going to work. The curbing of movement saw a rapid increase in cases of police brutality, cases of violence against women and girls, criminalization of poverty and denial of the right to assemble, move freely and expression. 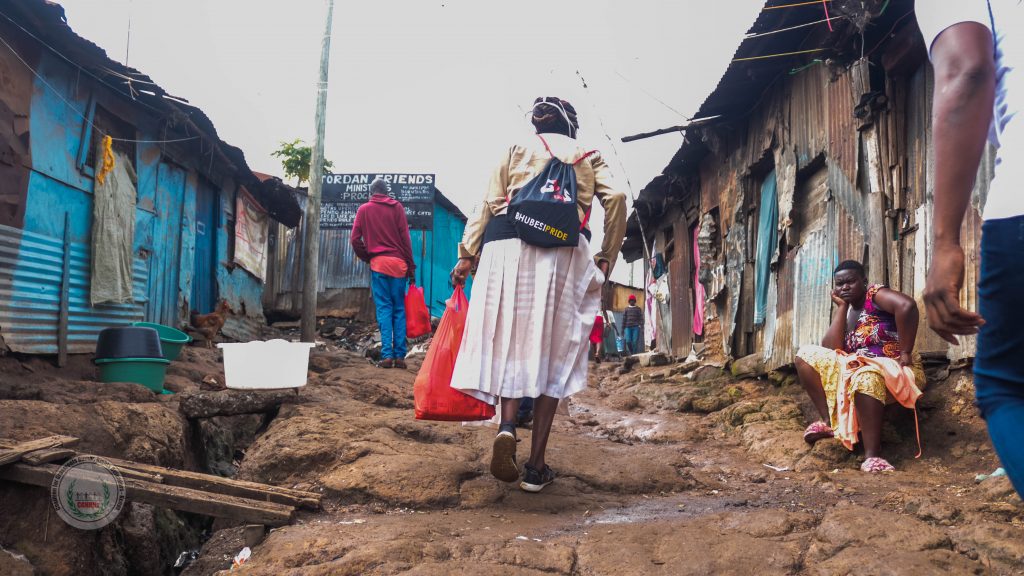 Article 43 of the Kenyan 2010 constitution states that every person has a right to the highest attainable standard of health, which includes right to health care services including reproductive health care. Access to adequate housing and to reasonable standards of sanitation; to be free from hunger, and to have adequate food of acceptable quality; social security, education and access to clean and safe water in adequate quantities. It also states clearly that a person shall not be denied emergency medical treatment. The state shall provide appropriate social security to persons who are unable to support themselves and their dependents. But, this right which is the heart of the Kenyan 2010 constitution, is not a reality. For a majority of the people during this pandemic, this right was neither respected, upheld nor protected by the government.

The government has not been defending the rights of its citizens by upholding the law. Instead, we have witnessed police brutality, killings and violations of human rights especially for those living in informal settlements. Majority of the households in such places are overcrowded with adults and children sharing the same room. The houses in these areas are mostly 10 by 10 square meters semi-permanent room constructed from iron sheets, mud and timber. Accessing sanitation facilities during curfew hours in these areas has been challenging for most people. Women and girls are the most affected, especially during their menstrual period, which has taken away their dignity and privacy. Most do not have a space to change and even access to a toilet at night. Coupled with a fear of the police, being raped, defiled and violated, they are left to suffer in silence.

There wasn’t a lot of media coverage on the grievances such people faced and went through, particularly girls and women. Grassroots community leaders, majority of whom are women responded by supporting their communities during the pandemic. They still continue to do so, though they did not get their work featured in any of the mainstream media. The upside though, the pandemic did lead to the exposure of frontline workers. The government hasn’t been recognizing them for the role that they have been playing which include defending human rights, feminism and activism. Local grassroots organizations and social justice working groups were able to step in and play the role that the government had failed to do yet it is its responsibility. Some of the work they carried out was the distribution of foodstuffs, face masks, menstrual hygiene products, handwashing stations and soaps. They also had contraceptives and family planning, supported women who had been violated by their partners and supported online classes for the students.

Effects of the Pandemic

Social and economic rights of women who are in the informal business sector and long-term health consequences are in fact impacted negatively. The lives of many women and girls, if action, support and investment is not taken, could continue dividing and increasing the gap of inequalities within societies. This will in turn impact the most marginalized constituencies in our local communities including the disabled, migrants, those living with HIV and AIDS, LGBTQI communities, sex workers and bar hostesses. 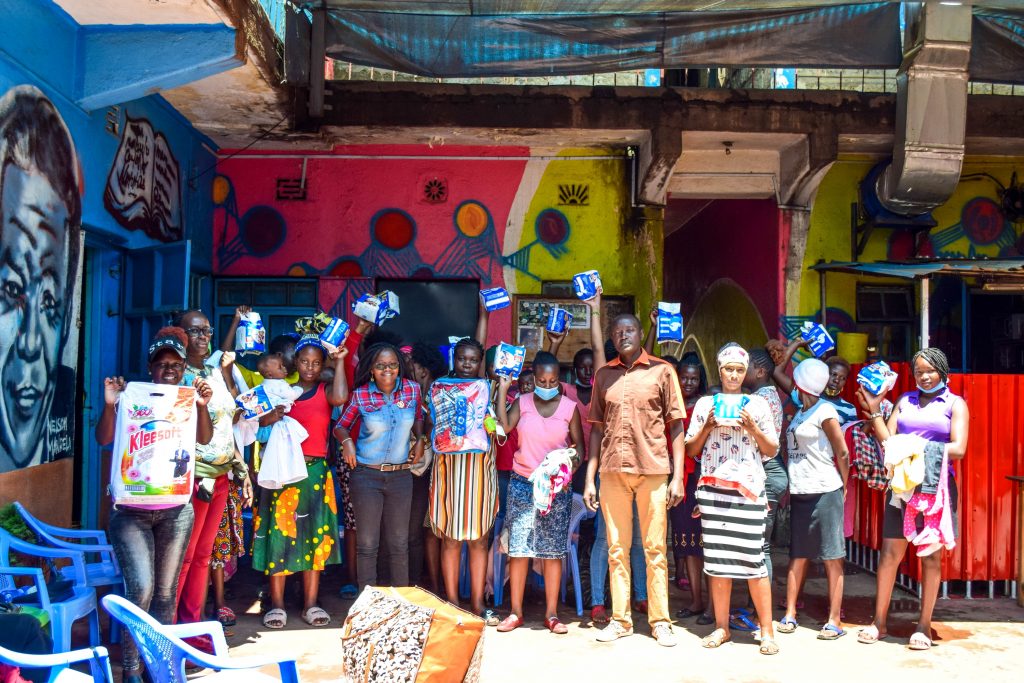 Lack of access to contraceptives and family planning has led to an increase in the number of unsafe abortions and unplanned pregnancies during this period, which has resulted to an increase in maternal mortality and policing of women’s bodies. Some men also took advantage of girls and violated them by enticing them with the promise of sanitary towels which the girls didn’t have. This led to a rise in the number of teenage pregnancies, which eroded the gains that had been made by the women rights and feminist movements in Kenya.

Violence against women and girls was another way in which the pandemic has affected gender justice. Lockdowns led to a drastic increase in domestic violence cases in the country. Having no domestic violence protection laws and safe houses that are protected and supported by the government, women and children can end up in extremely vulnerable situations and unable to reach the much needed services and shelters. This is problematic in the grassroots communities where women’s unequal decision making status within the households already impedes positive health choices. The imposed lockdown risks continuing to strengthen some men’s control over women’s bodies and health choices. It is important to support, invest and fund grassroots work and organizations, shelters and women support groups. Along with feminists and activists, they are at the frontline in supporting survivors of gender based violence and human rights violations. Investing in this group is important because they are the primary respondents.

There is already a lack of attention given to female health workers needs such as menstrual hygiene, personal protective equipment and psychosocial support, which have never been recognized. The women whose work brings them face to face with the virus are more likely to be discriminated by people within their households and community. This is due to the fear and misinformation surrounding the virus, combined with gender inequality. It is a reality that I have experienced and seen with my fellow colleagues. That is why it is important to include feminist leadership in decision making platforms right from the grassroots, all the way up to the top of the country’s leadership. 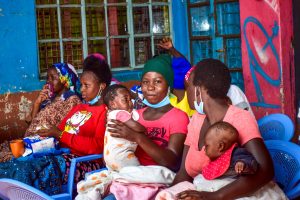 COVID 19 response must be feminist and human right centered. Government, media and global health communities need to learn from this ongoing pandemic and change their approach. Rather than applying patriarchal and discriminatory classist response, they can look at and use some of the best practices being carried out in the local communities on how they came up with gender justice strategies to protect women and girls. Government should follow the rule of law to protect, promote and defend women, girls and the Kenya constitution 2010.