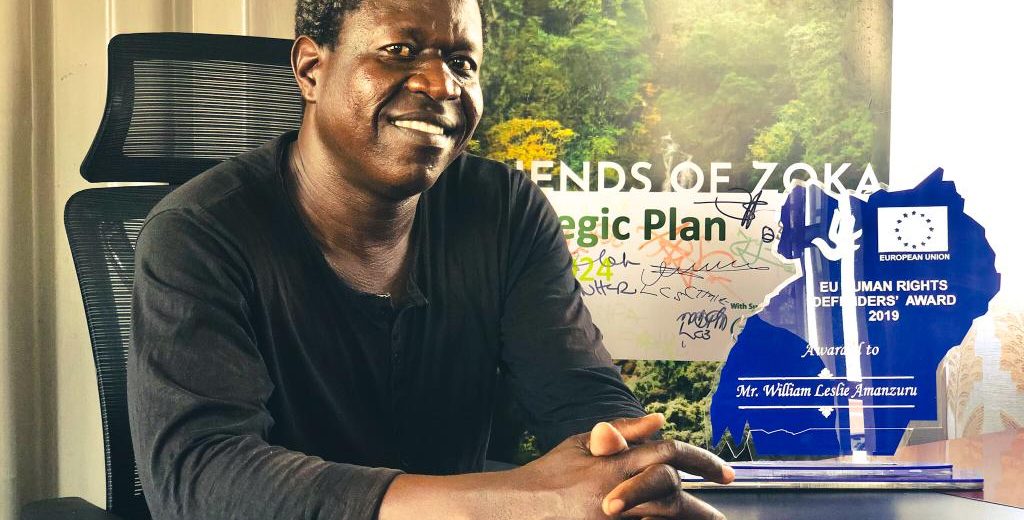 Zoka forest in Uganda faces imminent danger from illegal loggers and charcoal burners. Its destruction has also led to unpredictable weather patterns being experienced in the northern district of Adjumani. In the end, it is the local subsistence farmers who suffer the most from either the excess heat or the destructive rainfall. Friends of Zoka, a community-based organization arose out of the need to get to the bottom of it and find a viable solution. Led by William Leslie Amanzuru, they are gradually winning the fight.

A seven-hour journey by bus from the capital Kampala takes us into a moderately urbanized town. It’s mid-morning and the sun is already scorching hot you’d assume it was mid-afternoon.

We’re at the tail end of the first quarter of the year, yet Uganda’s northern district of Adjumani has barely received any rains. Ten years back the inhabitants of this district, who are mainly subsistence farmers, would be weeding their gardens having planted crops the previous month. However, this is no longer the case.

‘The temperatures have been extremely high and when the rains come, the damage they cause is immeasurable,’ notes William Leslie Amanzuru. He is a resident and the team leader at ‘Friends of Zoka’, a community-based organization in the district. He is also the 2019 recipient of the European Union Human Rights Defenders’ Award.

The question of what could have gone wrong is one that has been lingering in the minds of the residents of this district for a while. Consequently, a group of concerned residents suspected that the cause of this unprecedented weather pattern could have been as a result of the depletion of Zoka Forest, the only forest reserve within the district.

‘We witnessed massive destruction inside the central forest reserve and approached the concerned authorities but received no response from them,’ William states. He further notes that truckloads of charcoal continued exiting the forest, on a daily basis, amidst heavy militarization of the forest reserve as they helplessly looked on.

In 2016, as more uncertainty grew around the depletion of the forest, William and his colleagues formed a WhatsApp group and added officials from the local authorities. They later included some of the perpetrators they had identified so as to generate discussion around the rampant and questionable activities in the central forest reserve. Soon Ministers, Members of Parliament and security personnel from the local to a national level were part of the group. As the initiators, they played the role of intermediary between the locals and the authorities. This was the beginning of ‘Friends of Zoka’. Their interest was purely advocacy and to connect the dots as the ‘official’ custodians of the forest.

In the beginning, William and his colleagues were clueless about how to go about their new idea. They were both mentally and structurally unprepared, making them doubt themselves. However, their first meeting with community members gave them assurance and momentum to confront the local authorities. This would later create a big rift between them and the local leaders since the perception was that ‘Friends of Zoka’ were exposing their failures. On numerous occasions, they confronted some of the perpetrators, who had military protection and openly bragged off. These same perpetrators had also bribed most of the district officials who readily defended them. Yet all these were just a prelude to what awaited them.

‘Having been involved in the issues of Zoka Forest for about 6 years now, we are better placed to understand the challenges there,’ notes John Unzima, the Communications and Documentations Officer at ‘Friends of Zoka’. He opines that the question of Zoka Forest is one of interplay amongst the stakeholders who are supposed to safeguard it. ‘Our forefathers ably safeguarded the forest using traditional knowledge. It is therefore incumbent upon the current generation to emulate them or even do better. Unfortunately, we have not lived up to these expectations.’

Currently, there are illegal loggers in the forest and commercial charcoal producers inside and outside the buffers of the forest. There is also rampant poaching in the forest, making it unsafe. Some of the perpetrators are original inhabitants of the district while others are hired from other districts. The majority of the perpetrators are backed by powerful individuals in the corridors of power. However, the concerned government agencies like National Forestry Authority, Uganda Wildlife Authority, National Environment Management Authority, and other local authorities have failed to exercise their mandate in regard to the forest’s protection. Having fallen short of what is expected of them, ‘Friends of Zoka’ emerged to rectify this.

As earlier noted, the majority of the communities around the forest are subsistence farmers. The unusual weather changes could be directly linked to the depletion of the forest reserve as the rain cycle has been disrupted due to limited vegetation cover. There has been too much rain which destroys both crops and human dwellings. There are also instances of excessive sunshine and heat.

‘The only answer you can give the locals is that they are currently not living in harmony with nature. However, we encourage them to protect the forest in order to minimize the unpredictable weather patterns,’ William states.

They started by raising awareness among the communities about the benefits of conserving the forest and directly linked it to their survival. Secondly, they also considered the role of the central government as it is mandated to protect the forest and keep it in trust for the benefit of the public. Therefore, the public has a right to hold them accountable. They brought this to the attention of the local community as a way of instilling a sense of civic responsiveness amongst them. They engaged local media through radio talk shows and announcements.

At the national level, they engaged seasoned journalists to do thorough investigative work to get to the root of this problem. The dialogue was also used by engaging church leaders, senior government officials, and local authorities on issues of Zoka forest. They also initiated a campaign aimed at raising awareness about climate change in the local communities. They were educated on what climate change means, its triggers, mitigation, and how they can adapt to changing weather patterns.

Most importantly, they had a strategy of creating a platform where people could freely interact and share their thoughts. They embarked on capacity building as well to enable the community to comprehend issues and ways of addressing them.

Henry notes that having informed the local communities that it’s their primary role to protect the forest, the surrounding communities have recently realized that there is a need for them to act. The communities have been able to link the health of the forest to their day-to-day survival. The harsh realities of climate change have also become more apparent to the communities upon educating them. This has made them aware that it is very important for them to defend the forest.

Interestingly, their advocacy has led to the arrest of high-ranking officials like District Police Commanders, transfer of officials of Resident District Commissioners, and officials of the National Forestry Authority, as well as many others involved in the syndicate. Ideally, a transfer isn’t adequate, prosecution should be the best course of action. In any case, the transfers show the message is reaching the intended recipients.

They have reported quite a number of cases to the police which has led to court arraignments. Unfortunately, over 70% of the cases end up dying prematurely at the hands of the police. Upon making follow-ups they are informed that the files are lost. The district officials seem to be reluctant to follow these cases because the ‘godfathers’ of the perpetrators are high-ranking government officials and influential members of society.

They are also being secretly tracked and their phone conversations tapped, without any regard to their right to privacy. There are also physical threats to them, their close friends, and family members. Their private property has been broken into and destroyed on many occasions.

Then there are the trumped-up charges. William states that he has been arrested on more than three occasions. There was also a time when two of the team members were held at gun point when they visited an illegal logging site. Sadly, key security personnel were the ones behind this.

One of their informers was brutally murdered but the perpetrators are yet to be brought to book. Police officers have deliberately refused to allow any of the team members to make statements that would lead to meaningful investigations.

Lastly the non-ending blackmail, especially on social media platforms, has led to some of the local organizations within the district distancing themselves from them for fear of having their licenses revoked by the authorities.

Regardless of the challenges, ‘Friends of Zoka’ have been able to acquire many allies along the way. They have networks of women in the neighboring district of Yumbe working with the Shea Nut Movement; and the Elders Forum where they are educated in order to empower them on conservation issues. They have also held talk shows to discuss the conservation of Barifa forest in the West Nile City of Arua, bringing them even more partners. In the Acoli sub-region, they are partnering with a movement called ‘Our Trees, We Need Answers’. William notes that this kind of grouping enables them to get a coordinated response and also a foundation for documentation purposes.

‘Growing up we were told that we came from nature and to nature, we shall return,’ William states. He notes that the phrase places an obligation on him to keep his natural surroundings in good shape.

Henry states that he derives his satisfaction from the endless compliments they receive from the communities around the forest; and from the fact that the community members have become actively involved in the preservation of their environment as a result of their interventions.

‘Being a native of this area, there are instances when my neutrality as a journalist ceases especially with regards to environmental protection issues. I cannot watch the environment that raised me to go to waste. So, the motivation to defend it is a natural one,’ John concludes.