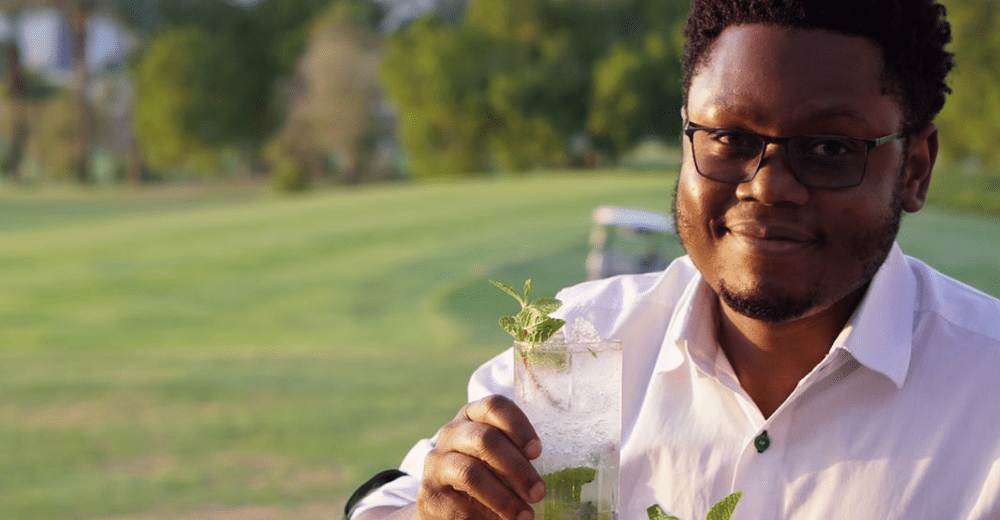 From a school dropout to a manager

Emmanuel Banda is the perfect example of trusting the process. Through resilience, consistency, motivation, hard-work and discipline, anything is possible. He not only made history but also serves as an example to be emulated and an inspiration to anyone out there who may be on the brink of giving up on their dream. In the third and final installment on Emmanuel’s experience abroad, Ritah brings the story full circle on how they met, and his unwavering determination that finally paid off.

Even at his new workplace, his drive to achieve more did not wane. He blended in quickly since he already had the skills, with the bartenders consulting him regularly. The bar manager, an Indian, was not fluent in English nor was he computer literate, both of which Emmanuel was great in. He would design the work schedules, order stock, and do stock-taking on behalf of his manager without the other employee’s knowledge. He had no issue with it and never asked for payment, he simply enjoyed doing it. Besides, he had bigger dreams and considered this as practice.

Luck seemed to be on Emmanuel’s side when he was made the interim manager for the branch since he was the only one who ostensibly had an idea of managing and running the bar. This was after the previous manager resigned due to the pressure that came with running such a big and busy branch. He ran it for two years but was never promoted to full-time manager or supervisor and was still being paid a bartender salary. When he asked for the promotion, he was told that the company was planning to get another manager soon, so he wouldn’t do it for long. He felt he was being exploited so he wrote a resignation letter the very next day, but chose to hang onto it in hopes that they would reconsider their stance and give it to him instead.

To this end, he put in even more work, with the bar performing superbly under his watch. A week later, a new manager was brought in and Emmanuel was tasked with training him. He immediately quit and handed in his resignation letter.

Afterward, he spent about a week evaluating his performance, trying to figure out a fault in his performance that warranted him being overlooked for the position, but he didn’t find any. It did not occur to him that on this side of the world, companies rarely have faith in Africans to award them with top positions. It is a shame really that incompetent people are given higher positions while their highly qualified juniors are overlooked and instead tasked with training them, just because they are black. It can be so frustrating working here, so much so that at times you feel like ripping the black off your skin, just to enjoy a fair working environment.

Surprisingly, two weeks after resigning, the company called him back. Apparently, in that short span, they had hired two managers already, both of whom had resigned due to the nature and challenges that come with the position. Emmanuel stood his ground and asked the company to double his salary and add some benefits. He won the negotiation and got his wish, more money, and the managerial position.

Just like he had always desired, he went back to school and is currently studying for a Bachelor’s Degree in Business Administration. He has also improved the standard of living for his family back in Zimbabwe, got married to a very beautiful lady, and has set his eyes on bigger goals. I believe his late mother and son are proud of him, wherever they are.

When the recruitment company that brought me here abandoned me, I job-hunted for two months before I came to learn of a hospitality company that I could apply to. At the interview, I was given a written exam and told to wait for the manager who would conduct a verbal one. As I was answering the questions, two waiters came by. One of them asked if he could help me answer some of the questions that I was finding difficult, before the manager comes, to which I politely declined. He started cracking jokes as his friend, though modest, laughed along. He then picked up my exam paper and proceeded to read my answers out loud. At this point, I was infuriated because of the disrespect but somehow managed to maintain my composure. All of a sudden his demeanor changed and he started reading to himself quietly. “Are you really a barista?” he asked, to which I nodded in affirmation. He began asking me questions about coffee brewing, which I hastily answered because I wanted him to leave before the manager came. “I’m impressed with your knowledge. Finish writing and come show me how you make your cappuccino,” he told me as they walked away, leaving me perplexed at his audacity.

After an hour of waiting for the bar manager, I decided to ask the receptionist whether he was going to show up that day, which took her by surprise. She had already told him about me two hours prior. I was asked to be patient, which I obliged. The modest waiter came and invited me for lunch during the staff lunch break. At the lunch area, the loud waiter was there and he was the most talkative of them all. I noticed that his food was different from the rest. He turned to me and insisted that I had to make an introductory speech in front of everyone before I ate. I have to admit that on that particular day I was on my best behavior, mostly because I was looking for a job because no matter how much he pushed my buttons I never lost my cool.

After lunch, I was informed that the bar manager had summoned me to the bar. On getting there, I found the self-proclaimed comedian there, but this time round, his attitude was different. “I need to be sure that you are as good as you claim. Impress me with a perfect cappuccino.” At first, I assumed that he might be the assistant manager or supervisor so I dutifully prepared the coffee he had requested as he watched. From time to time the other bartenders consulted him on various issues concerning the bar, and that was when it finally dawned on me that he was the bar manager, even though he put on the same shirt as the other waiters. He said he was impressed and would call me. I was more impressed by his humbleness, how he was very friendly and open with his juniors to the point that they addressed him by his first name instead of his official title.

That’s how I met Emmanuel Banda, my current boss. When I was hired I realized he was the only African who drove to work, and the only one in management, the first to hold such a position. I got curious and asked him how he made it through. That’s when he narrated the story of his life and below is the continuation of the second phase of his life;