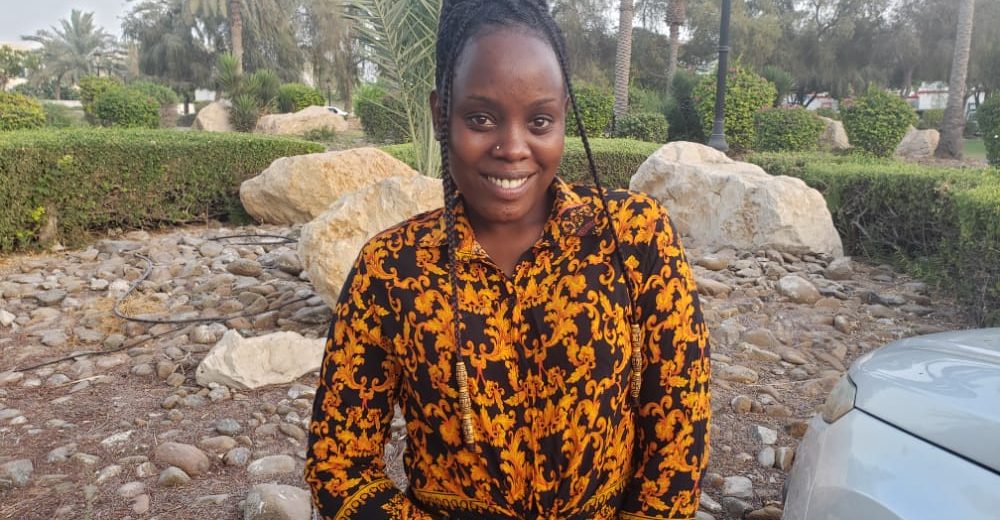 Whenever we hear about the tribulations that Africans in the diaspora are going through, especially those in the Middle East, our focus immediately goes to the often reported toxic work environment. We tend to forget that most of them actually went there because of problems back at home. Sylvia, a Ugandan living in Dubai, shares her experience of her first few months there and her plight back at home.

My name is Ritah Atuhaire; a Ugandan hustler living in Dubai. I have been sharing my experiences in the diaspora under the pseudonym ‘Nsima Nyo’ which means ‘I’m grateful.’ Indeed I am grateful for the life lessons so far, the experiences, and how far God has brought me. We endure a lot more than we get to talk about whenever we leave our countries for greener pastures abroad. Many catch us by surprise because those who came before us never shared their stories. I am glad I broke the chain of silence by writing real-life stories on Vice Versa Global about the tribulations that most African youth living and working in the United Arab Emirates go through.

A few days ago, a 24-year-old Ugandan lady jumped off a building in Dubai, dying on the spot. It is believed that she committed suicide because she had no job, food, or even a place to stay, and had overstayed for 90 days. Her reserved persona meant she never shared her troubles with anyone, something which may have exacerbated her depression.

Her scenario drew my attention to my reserved friend who came here with ‘the big dream’ only to face the rough realities of being away from home. However, she is unwilling to open up and share her problems with other people, including her family back home. Ascertaining what she is going through is very tough, yet I am the closest person to her at the moment.

Sylvia is a 22-year-old girl who couldn’t pursue her education past the ordinary secondary level because her parents couldn’t afford to. She would wake up every morning and watch other teenagers go to school, admiring the advanced secondary level uniform until her stepmother calls her up to do the house chores. As her age mates went to school, she would spend quiet days alone, with no hope of ever going back to school.

Her world seemed to have ground to a halt until her aunt came home with the exciting idea of going abroad to make money, instead of just seating at home. Sylvia saw this as the perfect opportunity to save money, which would enable her to go back to school and pursue her dream career of being a nurse. She was to work in Jordan for two years as a maid. Her aunt would cover the travel cost, which she would repay when she starts working.

When she landed in Jordan at around 2 pm, she was taken aback by the hot unpleasant weather. She had never imagined that a place could ever be that hot, having grown up in the cool equatorial Ugandan weather. A lady who introduced herself as Habiba, her boss, was already waiting for her at the airport.

On their way home, Sylvia’s eyes were firmly fixed on the car window as she admired the beautiful city. ‘I will read you my house rules for maids before you get there. So, pay attention and make sure you understand them properly to avoid any retribution in the future,’ her boss broke the silence. ‘The most important rule is to take care of my mother’s needs. It doesn’t matter what she asks for, you must obey and fulfill,’ she said. ‘You cannot sit on the house furniture, it is for family only. No sleeping when my mother is awake…,’ she continued reading the house rules, making Sylvia more anxious.

When they finally got home, Sylvia didn’t believe she was going to be staying in such a beautiful mansion. However, she was still uneasy. She couldn’t sit down for fear of breaking the rules. So, when they entered the living room, she opted to stand by the door. An old lady in her 60s walked into the living room and burst into laughter on seeing Sylvia standing by the door, nervous. Habiba laughed along.
‘My daughter is the biggest bully on earth. She must have scared you with her fake house rules. Relax, she just makes it up to see a new person’s reaction.’ Habiba apologized and asked her to feel at home, relieving the tension that Sylvia felt.

The chores were manageable and everything was moving on smoothly. When she received her first salary of UgShs800,000 ($210) after a month, she sent the whole amount to her aunt to repay the travel cost debt faster. She did this for the first five months without fail, with her aunt urging her to continue. Concerned, she asked her aunt exactly how much money she was supposed to pay back in total and when she would complete repaying it.

In Africa, it is considered disrespectful to question older people so her aunt did not take her concern lightly. She demanded that Sylvia keeps on sending the money until she tells her to stop. Her mother also got sick and needed around UgShs300,000 ($80) for treatment, while her dad asked her to lend him money to take her little brother back to school. She decided to send her sixth salary to her parents and would continue sending money to her aunt the following month, something the latter wasn’t happy about. The fact that she had worked for half a year without even saving a penny from her salary started getting to her.

The Covid pandemic affected Habiba’s job and she wasn’t able to pay Sylvia’s salary for about three months but promised to pay it all together when her workplace reopens. During this period, her aunt never believed that she wasn’t receiving her salary, accusing her of refusing to pay the remaining balance. This was too much pressure for the young girl to bear so she started wishing she could go back home. When she asked her boss whether she could go home, she was informed that this would only be possible once she repays the money that had been used to take her there.

This was when it dawned on Sylvia that her aunt had been lying to her all along, in reality, it was her employer who had incurred the travel expenses. It was such a disappointment. From then, she refused to send any more money to her aunt, and boldly confronted her with the revelation. That’s when Sylvia and her aunt became enemies. It’s also when she started saving her money and paying school fees for her little brother.

At the end of her two-year contract, she finally went back home through the money she had managed to save wasn’t enough to help her go back to school and support her brother’s education at the same time. She thought of an idea: use the money and go to Dubai, get a better job and save more.

She went to the same travel agency in Kampala that I used and that’s how we met. We met when we had to wait for a couple of months as the agency claimed they were still processing our travels. We were both frustrated about what was going on since we were both eager to start a new life elsewhere. Eventually, we did leave and that is when the real diaspora hustle started.

This is the first article on Sylvia’s story. Her unbelievable experience in Dubai shall be revealed in the second and third articles on the “Gulf of Despair” saga.