We live in a world full of plastic, and from the look of things, it doesn’t seem like this is going to change anytime soon. So, how are we planning to manage the resulting waste? I got the opportunity to visit the Lambu landing site on the shores of Lake Victoria and witnessed its devastating effect on the environment.

In the Greater Masaka area, more than eighteen tons of plastic waste were collected from the shores of Lake Victoria last month. Although most people in the region earn from collecting it, their effect on our waterways and food chain is evident. This makes recycling the only viable option to manage our waste and preserve our environment.

“The first sign that things had gotten more difficult was a reduction in fish production,” Ssemanda Godffrey, one of the plastic waste collectors tells us. Now referred to as a resource recovery agent (RRA), he took it upon himself and joined the Uganda Recycling Association (URA). It is spearheaded by Eco Brixs —a recycling company in Masaka district Uganda. He was equipped with knowledge of plastic waste and protective gear to assist him in his work. He later mobilized the entire fishing village to join the association, where they collect plastic waste for cash. This gave birth to the name ‘Fishermen of plastic waste.’ During the night, they go out fishing and return in the morning to sell their catch. Later during the day, they fish for plastic waste. Currently, there is an increase in their catch after clearing the plastics that had clogged the fish breeding grounds along the shores.

In October this year, fishermen mobbed the landing site to catch a glimpse of the 17ft long by 8ft wide locally made plastic boat which was unveiled on the shores of Lake Victoria. It is made entirely of recycled plastic waste materials which were collected by fishermen under the URA—Eco Brix’s recycling company—in partnership with the Masaka Catholic Diocese. It weighs four hundred kilograms, which equates to 16800 plastic bottles. Currently, boatmakers face the challenge of a depletion in the key raw material used for building boats, a tree known as emukebu. Currently, they have to rely on imports from the Democratic Republic of Congo, which is costly.

With Game Changer, the use of plastic waste has been proven to be a better alternative to making durable and versatile boats. “Plastic materials have the same volume, similar densities and weights that ease boat balancing, unlike timber which has different densities and weights. This has been a major challenge for many of us,” Banagoba, a boat maker, says. 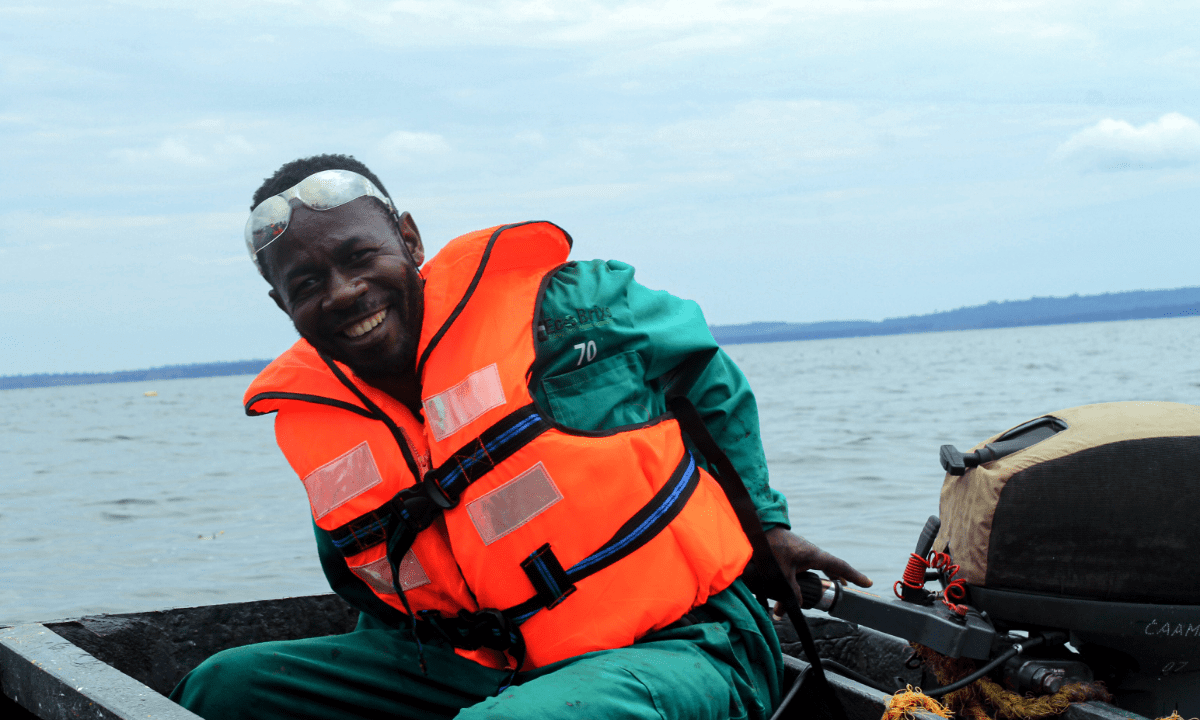 In his twenty years of experience in the boat-making industry, and as a lead member of the team behind this innovation, Mr Joseph Banagoba admits that this is revolutionary. “In my years of experience working with wood, I believe plastic lumber is the most suitable alternative. I urge my friends in the industry to try it out as it also saves the environment.”

Game Changer is used by Godfrey who manages the plastic waste network and has managed to share their coordinates on the recycling map across the lake shores. “By collecting plastic waste from the peninsula and surrounding islands, the boat spreads awareness about reducing plastic pollution. It can carry three hundred kilograms of plastic waste and if well maintained, lasts longer than wooden ones which last for between three and eight years. It also costs less to manufacture,” he says.

The boat is the first to be developed in Uganda, but not the first in the East African region. The idea evolved from plastic recycling, into a business model that generates income for RRA through the slogan Turn trash into cash.

“The invention is expected to encourage more people from the fishing village to participate in plastic waste collection. This is going to help them transform the unexploited recycling sector into a valuable venture that will provide employment, conserve the environment, and mitigate plastic waste pollution. This will eventually benefit the community,” Andrew Bownds, the executive director of Eco-Brix states.