The African Continental Free Trade Area (AfCFTA) has been received with a wave of optimism not only in Africa but globally. It has been hailed as a beacon of hope believed to hold the potential of alleviating more than 30 million out of poverty while employing millions more. Vice Versa Global talks to one of the biggest intellectuals on the continent, an anti-corruption crusader and a staunch Pan-Africanist, Prof. PLO Lumumba on this great milestone for the African continent.

The commencement of the largest trading bloc in the world on the 1st of January has been seen as a stepping stone to an African economic community and customs union as was envisioned two decades ago under the 1991 Abuja treaty. It seeks to create a single market for goods and services in hopes of boosting trade among its nations. Historically Africa has had a low internal trade and this agreement is meant to rectify that. It will work towards a continental customs union; eliminate tariffs on 90% of intra-Africa goods; aid in the movement of capital and people between countries; facilitate external investment; and reduce non-tariff barriers like the time it takes goods to pass through customs.

On paper, it has the potential to increase intra-Africa trade by over 50% according to the UN Economic Commission for Africa, while the World Bank suggests that the agreement could mean an added $76 billion in income for the rest of the world.

PLO Lumumba is a renowned Kenyan lawyer, staunch Pan-Africanist and anti-corruption crusader. Speech is not only unique to man but it is what makes a man unique and judging by his fluency in both thought and speech, he is a serious thinker.  His rhetoric has garnered him admiration from scores of people around the globe with quotes that often leave the mind with a lot to ponder. “Some will say my skill in speech is a gift”, he says in between a smile, “but I believe that over the years, you hone your skills, you read, and I believe that knowledge is the mother’s milk of all communication. The more knowledgeable you are the more comfortable you become.” 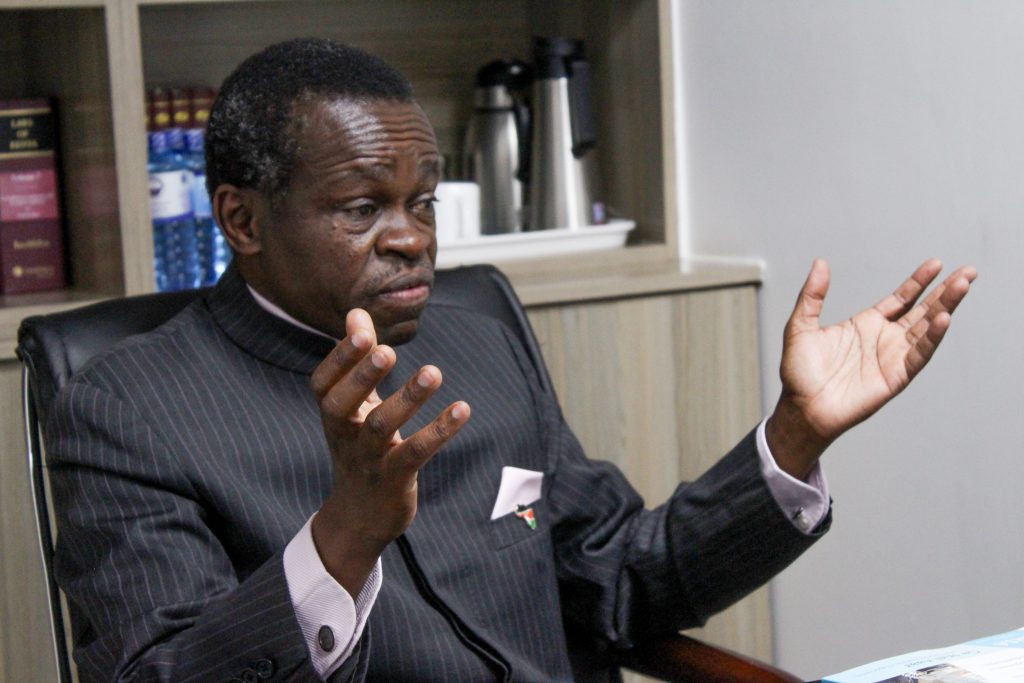 Not only is he a great orator with a mastery of the queens language, he is also mastering martial arts and founding a new art known as Niabuntu (willing to do good). The art borrows from different arts such as Kung fu, Kenpo, Jiu-jitsu and the Krav Maga. “Yes in fact we’re now founding our own art which is called Niabuntu. In the next two months, we’re going to have our own black and red uniform. We call it African but it will be a mix where we borrow from different traditions. The whole idea is not just the physical exercise but the mental exercise as well. The ability to realise that the body and mind must be wedded in order for you to achieve the discipline. To make your body a weapon not for fighting but a weapon for achieving what you desire.”

He shares the hope that the AfCFTA has and the potential to position Africa on the global economic arena. Synonymously, it will supress the rate of poverty within the continent to significant levels though he is guardedly optimistic. “The AfCFTA is a good thing. Without a doubt it shall create one of the largest markets in the world, but we have to work at it. If we don’t, individual countries will stand in the way of its implementation as it has been with the already existing trading blocs in the continent”, he says. He affirms that the AfCFTA will face challenges but it promises hope if it is taken on by crusaders with an exacting zeal to make it work. As a staunch Pan-Africanist he also believes it stands to solidify pan Africanism.

What is your take on Pan-Africanism for an integrated, prosperous and peaceful Africa?

“Just this morning I was reading The Revolutionary Path by Kwame Nkrumah. He says that Africa can only realise her potential if she works in unity and unison to make superfluous the colonial boundaries that we inherited. I believe that it’s incumbent upon us to talk and to do something about it. Unfortunately, Africa has been visited by very bad politicians in the last 60 years and that is our problem. Not all of them but the bulk of them. So that is why I keep on saying let us wake up and see what is doable, and it is doable, because I believe Africa has the intellectual, wherewithal, human and natural resources. The mind is the standard of the man and the woman.”

The AFCFTA is a sort of beacon of hope and there is a wave of optimism. Do you share that hope?

“I do. I am guardedly optimistic but I keep reminding people that it is not new. In 1963 on the 25th of May, Kwame Nkrumah spoke in Addis Ababa and said Africa can only realise economic prosperity if we collapse the borders and trade without tariff and non-tariff barriers. He was ignored and people became very wedded to their territorial boundaries. The AFCFTA is a good thing and I think that on paper you cannot quarrel with it. It is going to create one of the largest markets in the world with nearly one billion people. If we don’t work at it then individual countries are going to stand in the way of its implementation. You must now know that Africa has a number of trade blocs that are not doing very well because they are still quarrelling over petty things.

In the next five years what must begin to happen is that we must begin to have legislations that give practical impact to it. Just look at the domestic market, the critical areas and at agriculture. Today many countries are importing fish feed and sugar from Brazil, and maize from Mexico. Ironically there is excess maize in Malawi and in Tanzania. With a market of 1.3 billion in the domestic market, within 5 years the combined African GDP would move from the now conservative 2 trillion to anything in the neighbourhood of 10 trillion. That means you pull people up from poverty. 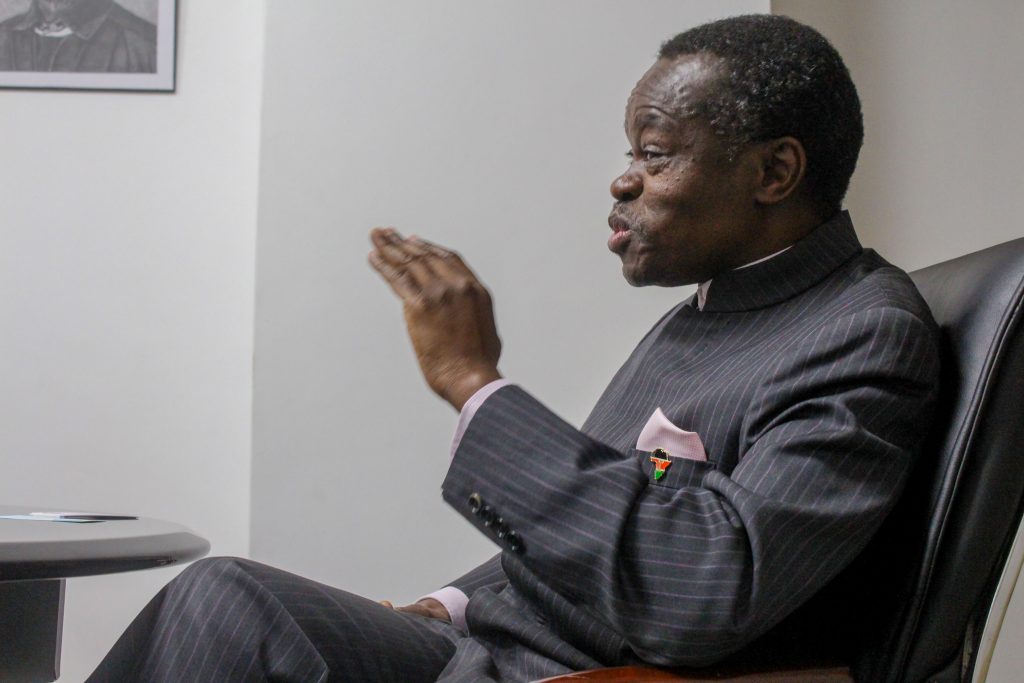 I’ve had a conversation with Wamkele Mene who is the CEO and I told him that this is not a bureaucrat’s but a crusader’s job. Moving from country to country and asking legislators to have a time limit within which legislations will be made. The area that we must first target is agriculture, if you can feed yourself then you begin to liberate yourself. Number two, allow labour to move, eliminate work permits and the market will filter labour. Eliminate visas, have free movement of people. Many countries use visas as a source of revenue but this can be replaced with permit fees which people will pay.

It has great potential and will face challenges just as we have seen with NAFTA in North America and with the European Union. It promises hope but it needs, I am saying and repeating, crusaders.”

From a political standpoint do you think it will lead to much more Pan-Africanism?

“In the long run the Pan African agenda must be given its pride of place. Perhaps my generation is not the generation that is going to make this happen. I tell people who sometimes feel discouraged that you only feel discouraged when you think in five years circles. If you think inter generationally then you will not be disappointed. I do not think in five years circles, I say my contribution is my contribution and the others will make their contribution. I have said this often enough, it takes a droplet to make an ocean. Be a good droplet. It takes one tree to make a forest, be a good tree. Don’t worry about the forest, worry about the tree and then the forest comes.”

“Without a doubt. The only way in which we can create opportunities for young people is for them to have an opportunity to move across the continent and to deploy their knowledge continentally. The Pan- African agenda is what is going to deal with the question of unemployment. It is what will deal with the question of peace and stability. All these Boko Haram and groups coming up is because young people don’t have opportunities. Do you know that we actually import paper from China? That can come here and it’s only through a Pan-African Agenda.

Why is the United States of America great? They are fifty countries effectively in the United States of America. The ability of a young person to make a decision that I don’t want to live in Portland Oregon, I’m going to Boston Massachusetts or I am going to Salt Lake City in Utah. You just take a bus. But if today I wanted to move from Djibouti to Senegal, first of all the visa and work permit would take seven years. That indeed does undermine your ability to deploy your knowledge in an effective manner.

Pan-Africanism, and one is not saying this from a romantic standpoint. There are those who romanticise about it and about African unity, that’s not what we are doing. The units will remain but what we are talking about is that we begin to congregate at the critical areas which are the economy. The areas of agriculture, supply chain and other things.  The administrative units will remain and people may have different forms of government in different units but simply for purposes of administration and implementation of the grand agenda.”

How can Africa leverage a position with pacts she makes?

“One of the things that the African union did actually agree on is that all negotiations will be multilateral and not bilateral. Lesotho negotiating with the United States is a joke. The daily revenue of New York is more than the G.D.P of Lesotho daily. My view is Africa must identify what she needs. Look at the things that are broadly African and the things that are specific to a particular country. You can do that in basket of negotiations because at that standpoint you are stronger. Africa already has resources like the essential ingredient in a mobile telephony, rare earth, is found in abundance in eastern Congo. Why not have a factory there instead of moving it? Anything relating to copper to be located in the copper belt in Zambia. I have no problem with the Chinese factory doing it as long as there is transfer of technology. What we want is that in 15 years you have transferred sufficient technology here so that when we come to you it’s only at a very high end. This cannot be done when you’re doing it bilaterally or when you don’t know what you want. That is the direction we should face.

In my quiet moments of meditation I often think of our great statesmen and forefathers. Kwame Nkrumah, Haile Selassie I, Thomas Sankara and Mwalimu Julius Kambarage Nyerere and their vision for the continent. It is my hope that the spirit of pan Africanism and their aspiration for a united Africa has not been buried in the African soil along with them. They fought so hard for it in a not so distant past with the hope that we, the future generations, would make it a reality and make them proud.”

On the second episode of this interview to be published on thursday, PLO Lumumba delves deeper on the role that the African youth should play to foster pan-Africanism, its relevance to them, their potential and how to cash in on their numbers.