When Jacques Issongo saw young men of LUCHA devoted to fighting for social justice and accountability in the Democratic Republic of Congo, he felt a call within that prompted him to join the movement. A movement that has brought significant change in the DRC while on the other hand, has cost him his job and family. He has faced countless physical assaults and arbitrary arrests as a result of his involvement with LUCHA.

I met up with Jacques at the African Human Rights Network (AHRN) headquarters in Dar es Salaam Tanzania. Here, he came for two reasons. “I travelled to Dar es Salaam, one, to attend the annual workshop of Young African Defenders in Action since I am a member. Two, to relax my body from the beatings I have received in my home country of Congo. We conducted a peaceful protest against the heavy taxes that were imposed by the government on all phone users since this is exploitation. In return we were intimidated through beatings,” he told me during our interview. His trip was facilitated by the African Human Rights Defenders, an organization that values activists and all human rights defenders.

Since its colonization in 1885, Democratic Republic of the Congo (DRC) has been plagued with violence, conflict and underdevelopment. Although the country has not officially relapsed into civil war since 2003, it has experienced an extremely negative post-war peace. Since 2008, armed groups have proliferated in the country. Today, around 70 different armed groups operate in its troubled Eastern provinces of North and South Kivu. A small youth-led movement emerged in Goma in 2012 that encouraged Congolese citizens to fight for the promotion and respect of human rights. It called itself LUCHA, a portmanteau of the French phrase Lutte pour le changement (‘struggle for change’). LUCHA sought to use peaceful protests to hold the government to account and agitate for change – particularly with regard to improving the dignity of the people through service delivery and social justice.

In 2016, they protested against President Kabila’s decision to postpone democratic elections. Ever since, they have been fighting for democracy though the price of protest has proved to be really high. “In the most extreme case, I was forced to flee my residence for the forest for a month or two. This happened in 2018, after I had left prison in December of 2017. We were protesting against then President Kabila under a campaign dubbed #ByeByeKabila. I became ‘wanted’ in Kananga, the capital city of the Kasai-Central Province in the Democratic Republic of the Congo. It is painful and hard living in hiding as I was. I had to change cities to keep myself safe. Living in fear forced my wife to leave with our baby and they have never come back since. Nevertheless I have no regrets,” he narrated fiercely.

Jacques disclosed to me how at one point he was wanted dead. “I really can’t tell what their intentions were, all I know is that a reporter told me to hide. He said the police had been ordered to maim my legs with bullets. They had planned to shoot me.”

Despite the harsh injustices, Jacques together with other LUCHA activists have remained dedicated to spreading awareness about poor service delivery and governance practices, and holding the government to account. “I am proud that right now I can confidently identify myself as a LUCHA. Some years back around 2015, I couldn’t even wear a LUCHA T-shirt. We were all living in fear as much as we were fighting so hard to bring change. Our greatest success was when our protests finally led to Kabila being voted out after 18 years. Congo had a new president. We have been able to hold several dialogues with government authorities. Even though we are still not yet where we intend to be, there is great progress,” he told me while showing the writings on his LUCHA T-shirt. 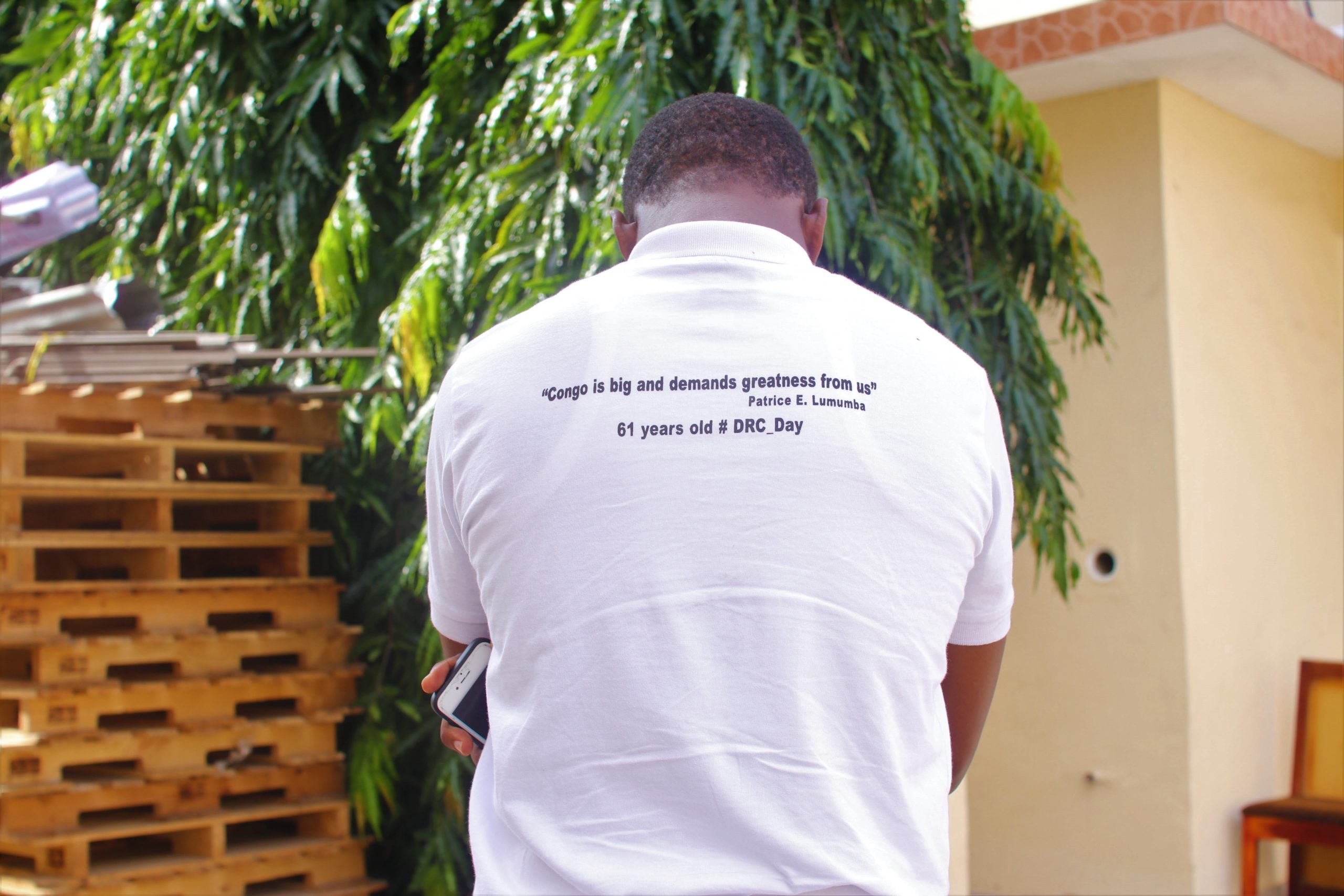 ‘Congo is big and demands greatness from all of us – Patrice E. Lumumba’ read the t-shirt he had on. Patrice Lumumba was a great Congolese politician and an independent leader who played a significant role in the transformation of his country. Jacques desires to see more of such leaders in his country who will lead the people of Congo independently and selflessly. “I have personally sacrificed my life for the betterment of my country’s people. I lost my job as an assistant professor in a university and on top of that lost my family. But, I have never regretted nor looked back since my efforts have benefitted millions of other Congolese. I believe someday we shall equally have leaders who will value us and lead the country with the dignity it deserves,” he said full of hope.

His passion for humanity landed him in the Young African Defenders in Action, a leading pan-Africanist youth network dedicated to promote and protect human rights and encourage youth groups to avoid violence. It connects and supports young defenders from different African countries working for a better Africa. “We are currently having a two week workshop that consists of young defenders working on community projects, to share experiences on our daily activities and current challenges in Africa,” he said.

According to Jacques, the workshop was very fruitful and of great benefit to him as they were able to learn from each other’s experiences. They realized that they are tackling similar problems across the continent and if they work together with combined synergies, change is bound to happen. By the end of the workshop, he was elected as the coordinator of YADA through voting. “As human rights defenders, we have a great responsibility for Africa, especially for my country Congo. Our endless protests are a fight for change and equality but most people do not realize that. It is a very difficult fight and all we can ask for is support. Let us speak in unison and demand what is rightfully ours,” he concluded.