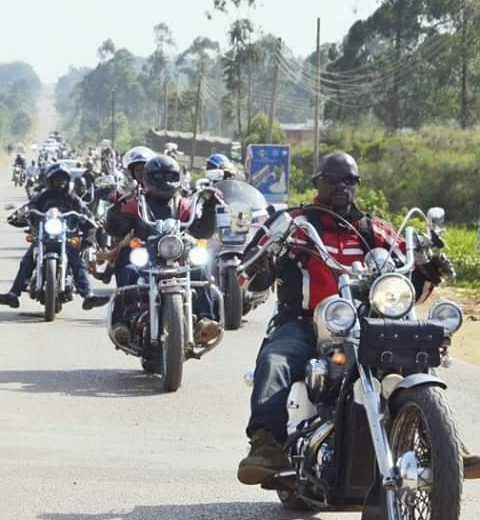 In Europe and other Western countries, biker clubs are normally associated with criminal gangs and other social evils. However, in Uganda, a bikers club from Masaka is actually helping out in the community through several social outreach programs. Vice Versa Global’s Martha Nalukenge sought to find out more about them and what drives them. ‘We ride with vision and mission.’ 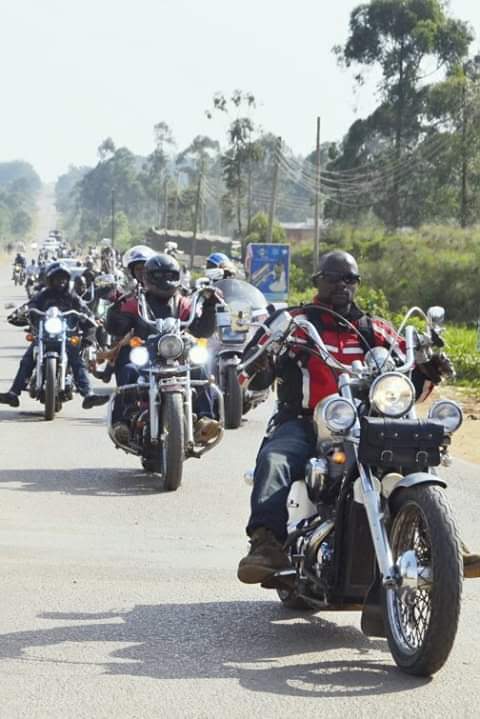 Masaka Bikers Club is a non-profitable organization that was launched in 2015. Led by biker Hajj Umar Sekasamba Bukenya and his biker friends they turned their dreams into reality, that of helping the local community and bikers in Masaka. Its foundation is based on helping bikers in the greater Masaka region and the local communities through health, road and safety awareness, among other charitable activities.

They live normal lives and have fun just like the rest of us. You will only notice them in traffic when they dash by with amazing speed and quickly disappear. Such incidents tend to give off the impression that bikers are a mysterious group whose riding skills expose them to big risks. Nobody, in my view, should be blamed for holding such opinions about bikers.

We should perhaps begin with asking, who is a biker? The most common definition of a biker is a person who uses a bike as a means of transport, rides with pride and pleasure and holds a particularly strong bond with his or her bike.

The Masaka Bikers Club engages in lots of community activities and projects including charity, health awareness, HIV/AIDS awareness, human rights and road safety awareness. Sometimes they carry these out in conjunction with other existing organizations. In 2014-15 they carried out a road safety awareness activity in conjunction with World Vision. During the Covid-19 pandemic, they carried out community outreach programs and charity rides. Through this they were able to raise money to support their food distribution program to the local communities that were most affected by the pandemic and the resulting famine. They also held a hot spring ride, with the money raised being donated to widows and orphans.

There might be some members with low self-esteem and who feel inferior to their peers. This might be due to the type of bikes they have, yet they harbor dreams of buying the ones that are to the standard of the club. For those ones, they created a financial scheme that will help them to save. This can be either to meet their set targets or to support orphans and families of deceased fellow members. The saving group loans out the money and the profit is saved to meet their goal of opening up a very big hardware shop, which will supply spare parts to their fellow bikers. The Club also helps out bikers in the region who get serious injuries through road accidents.

They ride for pleasure and community charitable sensitizations and awareness.

Requirements to be a member of MBC

Just like any club there are rules and regulations that govern the club. They don’t tolerate half-baked minds, either from members or its employees. The club has procedures that have to be followed by every individual. There is a discretionary policy in the club so it’s hard to know the exact number of club members because they keep it to themselves. However, the club comprises of both genders and in this case they follow a well laid out criteria for recruitment.

Every biker is the face of MBC and good conduct is a brand of one’s behavior. An ideal attitude is a result of positive behavior thus ensuring that MBC is well represented.

They have an order that they maintain while riding known as parallel method where one of the senior members is at the front and another senior rides at the back. Basically, they align based on seniority. The club’s other older members are in the middle followed by new riders and finally the chairman or another senior rider rides at the extreme back. Just in case one gets pulled over, the entire pack will pull over.

Flexible mind leads to the growth of the club so a member has to be a strategist. Thus, having an eagle eye in conquering markets, business strategies and knowing which new market has emerged in the world of business is extremely useful. This is because sometimes the club goes commercial when need be.

The essence of their code is based on appreciating, acknowledging and respecting one another. Being role models in society, they all hold formal work positions beyond having big bikes. It’s not mandatory though, white collar job qualification or not, you can still join the pack. Idleness is the sickness they immunize against in every individual before they join their club.