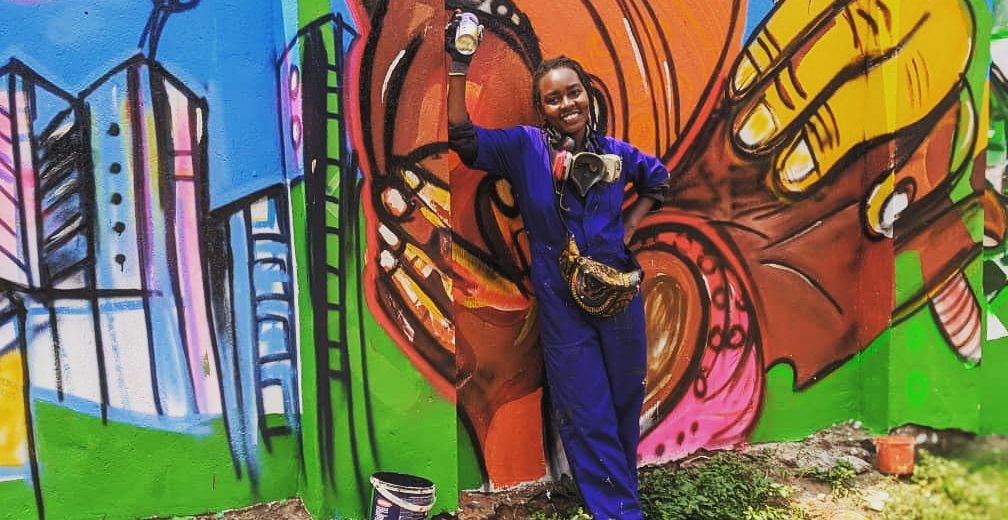 Vice Versa Global’s own Martha Nalukenge caught up with one of the finest graffiti and mural artist in Uganda at the moment: Fatuma Hassan. She is causing quite the stir with her paintings not only in her country but beyond the borders. What makes it better is that she’s just getting started.

Fatuma Hassan is an abstract painter, graffiti artist and a muralist who lives and works in Jinja, Uganda. A native of Ndjamena, Chad, her colorful paintings pay homage to African traditional culture.

Her distinctive personal style is inspired by her community, the joy and love that originates from there, the music that expresses the vibrant spirit and the atmosphere of the African culture.

Fatuma’s passion in art started when she was a child. Going by the mantra, ‘You can create anything once you’re able to visualize it in your mind’, she nurtured her innate talent from that young age.

She went ahead to study at the Nagenda International Academy of Art and Design from 2014 to 2017, where she earned a Diploma in Fine Art. She built on this foundation and became a member of the Uganda Visual Artists and Designers Association (UVADA). She is also an ambassador of The Creative Tribe, Jinja, where she currently resides.

Her journey to raise awareness

She has since embarked on an incredible journey to use her talent as a media to raise community awareness, by teaching the youth moral and fundamental values that will ultimately improve the society she hails from. Having participated in a variety of international projects, she has developed a key message that circumnavigates the African woman and the majesty of the female figure in the traditional African setting.

This unique concept has quickly gained momentum around the country earning her style recognition and appreciation. At the moment she is Uganda’s most active female muralist with over thirty murals in various corners of the country today.

The popular Afri-Cans movement has now taken her on as their first Ugandan female artist. Thanks to this exposure, she has been able to take her incomparable gift across borders to Rwanda, Burundi, Tanzania and Kenya.

Her powerful message has touched the hearts of many. This led her to create custom works for many political dignitaries, giving her the platform to not only raise her voice, but to also showcase her work. As a young artist, she now believes that she can make use of this influence to raise the voice of the girl child in Africa.

A great piece of art can be very transformative. It not only transforms the object on which it appears on, but can also transform the community in which it resides. It has the opportunity to tell the community’s story and create a unique experience. Art can also influence the society by changing opinions and instilling values.

Her fantastic journey is only at it’s dawn and there’s every reason to expect much grander marvels from her. She hopes that through her art, she will in the end be able to change the world.