The outbreak of Covid-19 is forcing people to be creative. Esther Bulimwa is a Ugandan teacher, but found herself without a job due to the closure of schools. She actively looked for something else and is now the only woman working at a road construction site. Our reporter Martha Nalukenge spoke with her.

During one of my usual morning strolls in our neighborhood, something unusual caught my eye; a young woman was working steadily on a heap of concrete.

I stood by and watched as she loaded the ready mixture onto a waiting wheelbarrow.

After she was done offloading the wheelbarrow, I walked up to her.

“I noticed you were looking at me strangely,” she said.

As I tried to get defensive and save face, she swiftly interjected.

“You’re not the first,” she asserted.

“I’m Esther Bulimwa by the way,” she added.

Shortly after we exchanged contacts and agreed to meet the following day at the same spot.

After the outbreak of the Covid-19 virus in the country, a number of measures were put in place to combat its spread. One of those measures was the closing down of schools. 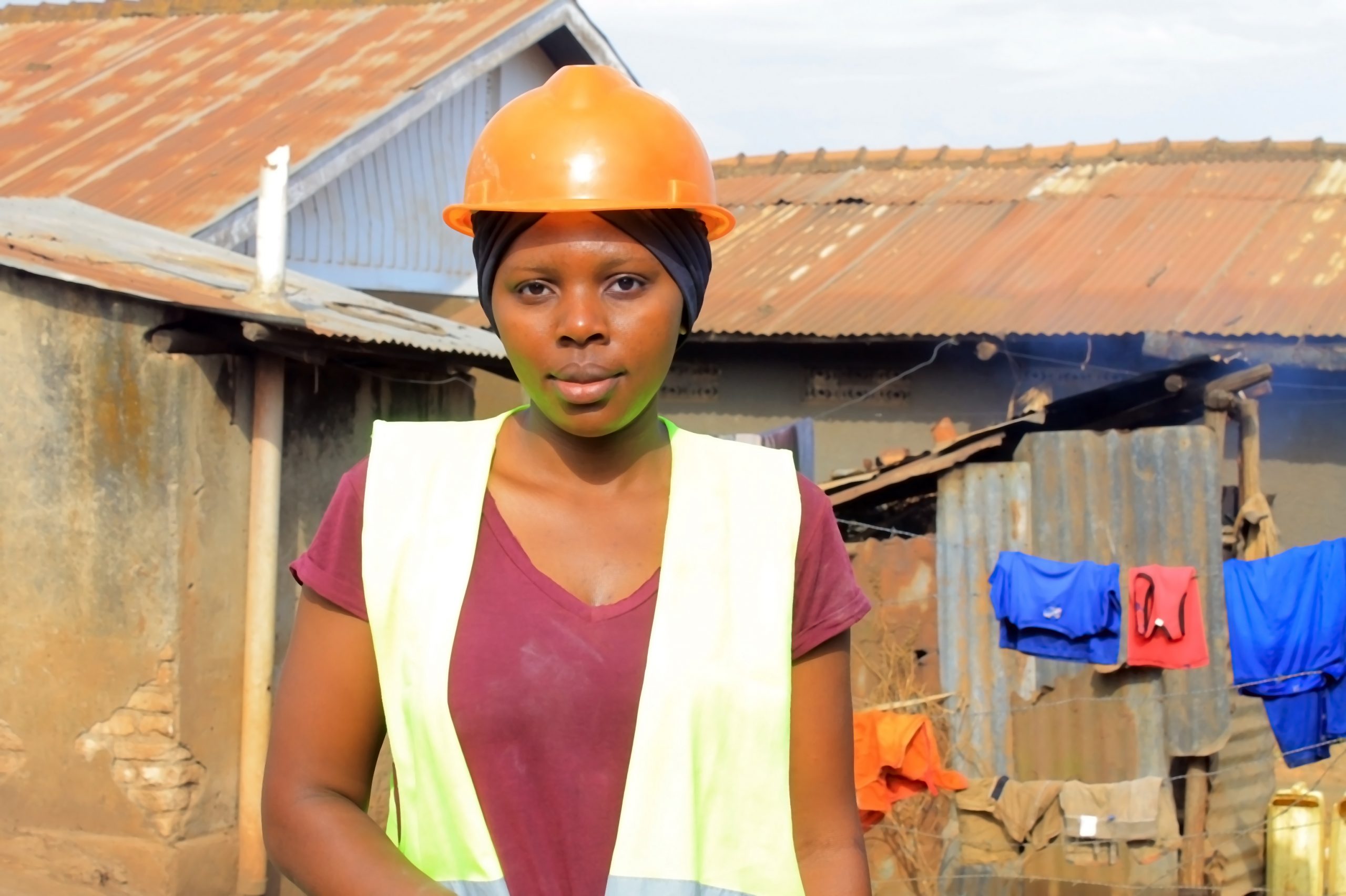 A nursery school teacher by profession, Esther’s teaching job at Divine Educational Centre in Sironko District in the Eastern part of Uganda ground to a halt. She soon found herself in the pool of unemployment like most young people in her home country.

Without an alternative source of livelihood, poverty and starvation were inevitable for this young woman.

Driven by the fear of hunger and an empty pocket, she attempted to join the police but was unsuccessful.

Not one to give up easily, she gave it a second shot. Lucky for her, she was offered a short term contract of 3 months at Kibiri Police Station as a police constable. However, after its lapse the contract was never renewed and once again, she was unemployed. She gave out a sarcastic laughter as she narrated this to me.

One fateful day, Esther received an invitation from her sister to join her in Masaka in South-Western Uganda. Things were not so rosy when she got there either, and it was equally hard for her sister who was also struggling to put food on the table. She then set out on a job hunting spree though she was unable to land on a decent one. 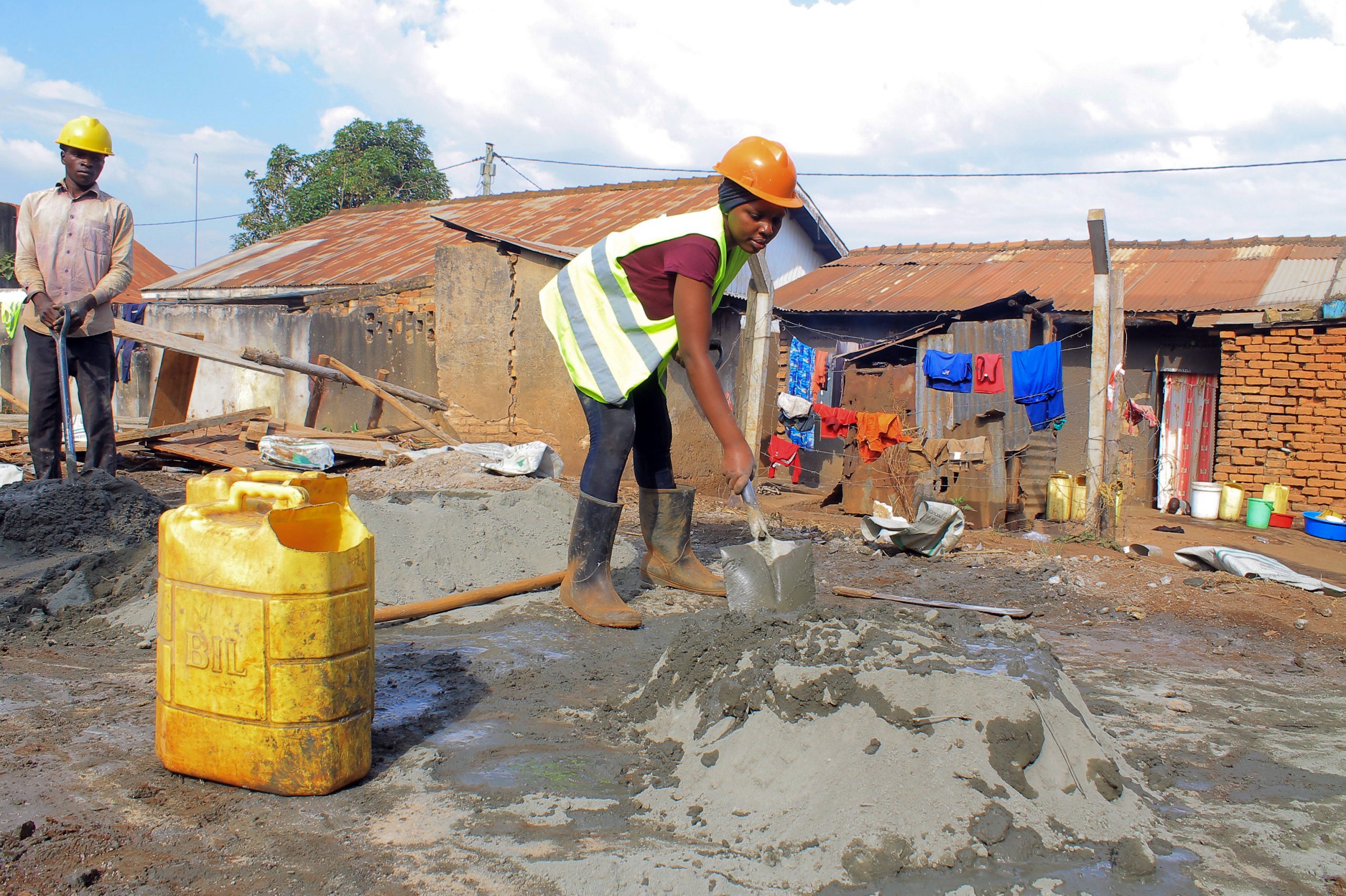 It was not until she opened up her mind further that she finally settled for the construction job as a site assistant.

“I couldn’t just sit there knowing I have no penny in my wallet yet there are some jobs at the construction site that could earn me a living,” she narrated.

“I had to embrace the fact that I was jobless and desperately in need of a job. I also realized that the kind of job you do doesn’t really matter. All that matters is that at the end of the day, you can take care of yourself,” she added.

In her quest to try and cope with change, Esther has been able to stand against all odds by taking on a job that society has always assigned to the male gender. In fact, she proudly associates with the saying that ‘what a man can do, a woman can do better.’

She goes on to further advice young people, especially women and girls, to turn a deaf ear to naysayers and simply concentrate on earning a decent honest living.