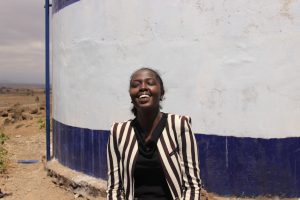 Access to clean water could never be taken for granted, recalls Judith Soila Parantai from her childhood; the water was always far away and often dirty. She is now back on her home ground and has provided a village with tap water. ‘Nothing makes me happier.’

When the pandemic broke out the World Health Organization and the Kenyan government urged people to wash their hands frequently, but in marginalised communities like Isinet that was not so simple. It was there, in the far south of the country at the foot of Mount Kilimanjaro, with spectacular views of the mountain, that the WASH First project to curb the spread of the disease was set up.

Judith Soila Parantai is already waiting for us in Isinet. The jovial but modest 26 year old water engineer grew up in this county. She saw how the community struggled to get water and used to walk for hours with her mother to fetch it. ‘After high school,’ she says, ‘I got the chance to teach somewhere far from home. I saw with my own eyes how difficult it was for women there, because water was scarce. Sometimes they went to bed hungry because there was no water to cook with. It sparked off something in me: it had to change, not only there, but where I come from as well.’

‘Luckily I received a grant and was able to study at the Kenya Water Institute. After that I got a job at the Loitokitok Water and Sanitation Company, which is full of young and innovative spirits – the oldest is 33. The director always puts young people first.

I had the honour of rolling out the technical side of the WASH First project and had the full trust of the director. He gave me a completely free rein; now and then I would report on progress. First we arranged a “water kiosk” for Isinet and now the community has every reason to smile, because we connected five schools and six churches for free. It makes a big difference,’ she says, her face lighting up.

Isinet was the most remote and forgotten part of the country as far as access to water goes. For decades people had to walk miles for it and when they got there it was usually dirty. In 2020, for the WASH First project the Neighbours Initiative Alliance (NIA) – supported by Simavi – worked with Soila Parantai’s company to connect homes and other buildings to the water supply. ‘As you can see, there is now one big storage tank, so just imagine what it used to be like. Nothing makes me happier than seeing people here in their homes using water: there are now about 60 households connected, each with about five family members.’

In the community there is not only relief about the supply of clean water, but they can now also wash their hands frequently to combat the Covid virus. While the number of infections in Kenya was rising the government called this one of the best preventive measures – including the better hygiene.

Where water is scarce, people run a greater risk of contracting Covid. ‘In my home town of Kajiado West,’ says Judith, ‘people are still suffering from water shortages. This project is the first one of its kind to work with a water company to improve the situation.’

Judith Soila Parantai, Patrick Mwanzia of Simavi, Kenny Matampash of NIA and several staff members of the water company visit a few households to compare the situation now with what it was. They stop first at Esther Kasoi Kasoo’s house. ‘As a greengrocer,’ she says, ‘I used to walk for more than three hours to fetch water and I can tell you it wasn’t easy. I would get up very early to buy in vegetables, hurry back with them and then go out to fetch water. That was my daily routine, and sometimes when I got there the water turned out to be dirty.’

She continues: ‘I then had no choice but to collect it anyway and wait at home for the dirt to sink to the bottom so that I could use the top half. The clothes you see hanging on the line have never been as fresh as they are now – the water shortage made it almost impossible to wash them. Now I’m a happy woman, and my business is doing better too because I have much more time to sell the vegetables, and I even have time to rest.’

Waiting a few metres away is Loyce John, who used to walk for five hours to fetch water. Her husband looked after the cattle, she did the housework. ‘It was tough,’ she says, ‘walking those two and a half hours there and two and a half hours back… And then the water was hardly ever clean – and yet we had to put up with it for years. At the moment I’m so relieved there is tap water nearby. Gone are the days when I had to walk for half a day to fetch what is now simply right here. It even allows me to take a few extra jobs to supplement the family income.’

All that is thanks to Soila Parantai. The director of the water company says he has absolutely no regrets about putting them to work right away, straight out of college and without much experience. ‘The experienced staff sometimes think it is beneath them, but the young ones are extremely driven and eager to learn as much as possible. Their energy also helps. They are the ones who turn up when there’s an emergency in the middle of the night.’

Soila Parantai says she is proud of her position, mainly because she comes from the Maa community, where women are expected to be seen but not heard.  She wants to be a role model for young people and change that narrative – and she calls on employers to give young people a chance to gain experience on the job. ‘Youth unemployment,’ she says, ‘is starting to become a crisis and it often leads to depression and suicide. Many young people have a diploma, but not yet the experience – which is why they can’t get a job. How can you gain experience if you don’t get the opportunity?’

WASH First is funded by the Dutch Ministry of Foreign Affairs and contributes towards the promised fight against the pandemic. The aim is to improve hygiene to reduce the spread of Covid-19 in high-risk countries by providing more WASH services and raising awareness about them. It will run for fifteen months (from September 2020 to November 2021) in six countries. In Kenya, Simavi is the lead organisation and SNV and Plan International are the other members of the consortium. The Neighbours Alliance Initiative (NIA) is Simavi’s partner in Kajiado County. WASH stands for Water, Sanitation and Hygiene – and that goes First.

This story previously appeared in the youth special of Vice Versa.