Imagine if trees gave off Wi-Fi signals. We would be planting so many trees and we’d probably save the planet too. Too bad they only produce the oxygen we breathe. As we celebrate the birth month of one of the greatest environmentalists of our time, Wangari Maathai, we are reminded by a group of senior citizens that it’s never too late to make a change and plant that tree.

Controlling the rise of greenhouse gases is becoming very difficult due to an ever growing population. In most slums there is a scramble for the little resources that are available. Lack of social amenities also make the air more toxic and the ability to reabsorb carbon dioxide is drastically reduced. Climate change has increased the vulnerability of slum dwellers and as such more trees and vegetation need to be planted to purify the air in such areas. With more trees there will be less flooding risks as has been witnessed in the past. Less flooding risks means no lives lost as a result of it. Another aspect is on better housing and providing livelihood to communities to trim down rural urban migration.

On this day, I am excited to join Malasen Hamida, the founder of Mazingira, a community based organization in Dandora. Matters environment hold a special place in her heart so she committed to planting 500,000 tree seedlings in the informal settlements and other parts of Nairobi. Today she is taking different types of trees and seedlings to a group of old men she is going to visit in Dandora. Our journey starts at 9 o’clock in the morning. Our ride is smooth on the main road though we do get lost a couple of times when we get to Dandora. We have to make several phone calls for we don’t know where exactly we are going. We decide to stop at a police barricade and seek help.  We are approached by a very friendly police woman who after speaking to our driver, tells us to park aside till someone comes to pick us.

The Open Office along Nairobi River 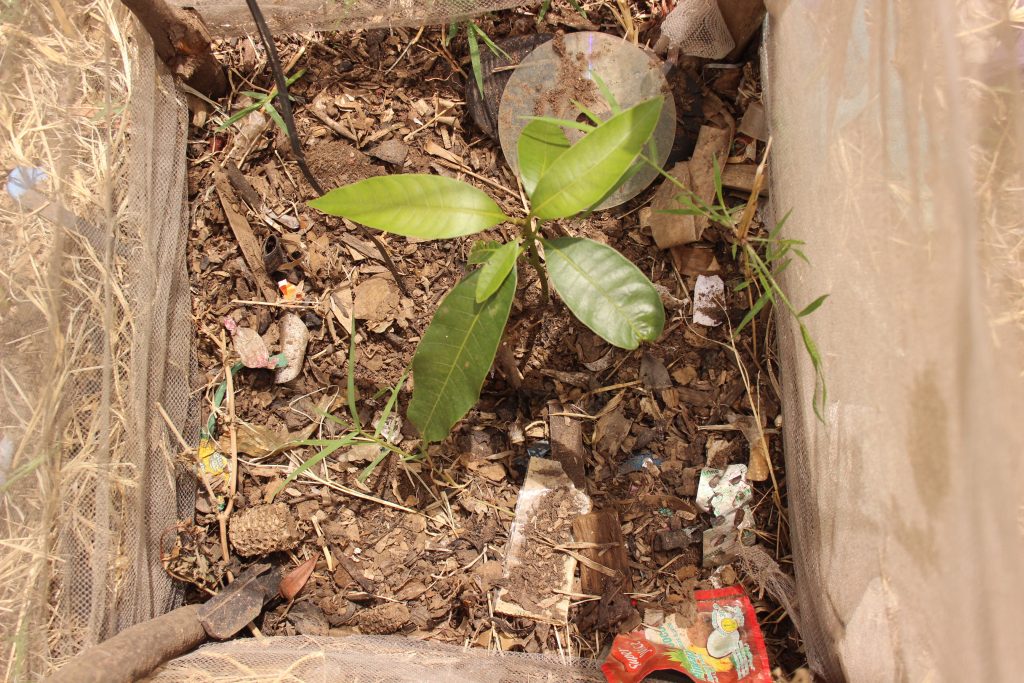 It is not long before a young middle aged man shows up and directs us to a safer parking spot inside a police station. We are joined by two old men who assist us in carrying the trees. After a short walk we get to a very beautiful piece of land located near Nairobi River. It is filled with trees and lots of green vegetation. Here we meet 7 more elderly men tirelessly working. Some are digging holes while others are looking for manure. That is when it dawned on me that contrary to my earlier assumption, these old men working here are the ones we were set to meet.

The general assumption is that young men and women are more vibrant and energetic, more so when it comes to issues of climate change. As a result of this presumption, more funds are directed towards that age group, neglecting the rest who are also in dire need of it. Well, this particular group of old men have decided to change the narrative. They are proving beyond a reasonable doubt that they can also be environmental champions. 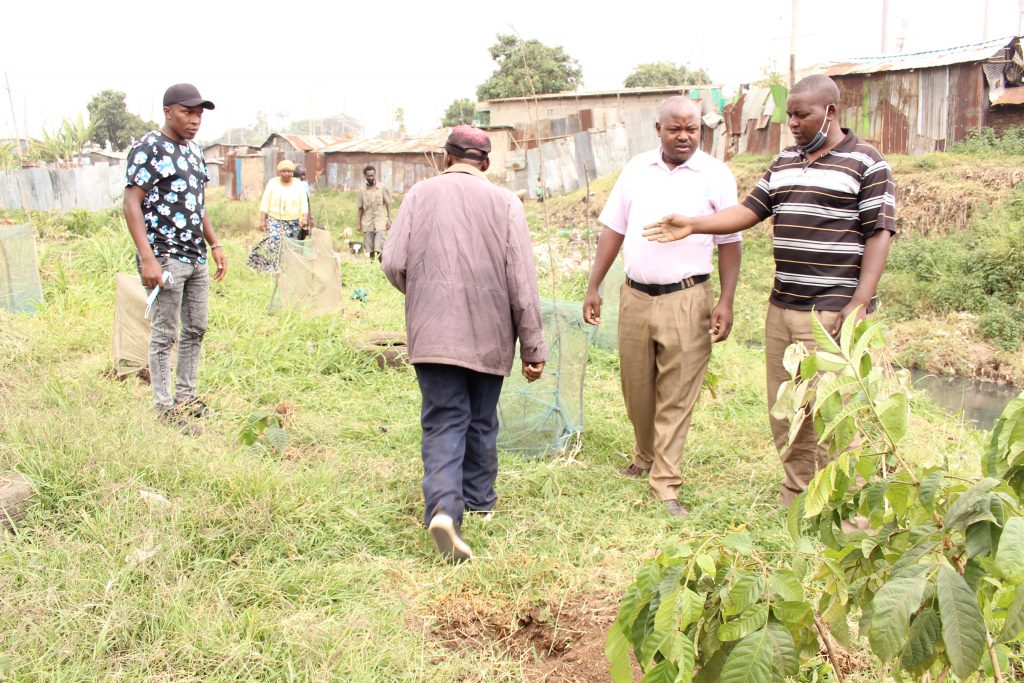 While their peers prefer to while their time away in local brewing dens, or even enjoying some quality time with their grandkids, these old men move different. You’ll find them busy clearing bushes, digging holes to plant trees in and looking for manure. “Welcome to our office. This is where we meet every weekend,” the spokesperson tells us. The old men have three benches with the sides covered with sacks. The sacks are worn out with only small patches remaining. This is what they call their office. While seated you forget about the office and start admiring the beautiful scenery. Apart from the trees, I come to realize that they had planted lots of vegetables. I looked around and a beautiful gabion catches my eyes prompting me to move closer. I had to keep on reminding myself that all these were being done by old men.

“Canaan River Side is a group of old men. When it was started some years back, the group consisted of young people as well but as time went by they quit. Now only one middle aged man remains. The reason behind their departure was that they needed quick money. Some were simply impatient, while others kept wondering why they were working with older men. Now the group has 40 members. They meet every Sunday and make sure they raise money to buy 5 trees which they would plant the following day. Each member contributes 100 Kenya shillings and a mandatory 50 shillings if you come late for the meeting. There are also other fines, like for absenteeism, with the money going towards the purchase of trees,” explained Patrick, the spoke person for the group.

“As you can see we are old and when we are gone, at least it will be remembered we did something. Instead of us going to take beer or join the daily politicking, we saw it was important for us to do something different for the benefit of our community and the environment. We believe this place will be very ideal for relaxing and even the children will be happy. We love trees and our environment. We are alive to the fact that when these trees eventually grow, the bad smell emanating from the river will be neutralized,” an elderly gentleman tells us with a wide smile.

Among the people with us is James Wanjiru a community leader fondly referred to as ‘Uncle’.  “This group is unique,” he says. “When you promise them something, they keep asking for it, they follow up, they disturb you with phone calls after phone calls. One would think they are following up on some cash but it’s actually trees”. He goes on to tell us that they are not only planting trees, but they are also working on other environmental issues as well. “They have constructed gabions along Nairobi River to separate it from their trees. As old as they are every Friday or Saturday they go into the river where they collect stones and clean the river” 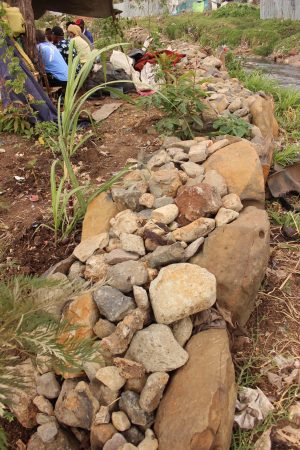 “Collecting stones is tiresome so we wait till the next day to arrange them,” Patrick interjects. “The big and heavy stones are pulled from the river using boda bodas which we have to hire”. Uncle tells us that this has not only beautified the area but they have also managed to divert the river not to get into houses near its bank when it rains. “When we were starting out, one day it rained so heavily that all our trees were swept away. We almost lost hope but we decided to come together again and use whatever we had to protect the trees that would be planted,” another group member explained.

In their course of duty, they face numerous challenges. For instance, the river bed is filled with lots of broken glasses and they need proper wear like gumboots to keep them safe. They also need wheelbarrows for carrying stones and water tanks to store water for watering their trees.

The Young Man In The Midst Of the Old

Shem Odada is the only young guy in the group. When they started out there were many young people but they left. “I thought it wise to remain here. Sitting and listening to the old gives me wisdom. There are a lot of things that I don’t know which they teach me, including family issues. Likewise, there are things they can’t do which I help them with,” he tells us. “I regret the one year I wasted with the young people. Every person had their own idea with none willing to listen to the other. It was therefore very difficult to know which idea to implement.”

Shem’s knowledge about trees is incredible. For instance, he tells me that a tree takes one to two months for it to be stable. The tree’s height is the same as its roots due to symmetrical balance. He understands clearly the effects of rapid urbanization and global warming. Though his team members have persistently insisted on using the water from Nairobi river, he has refused to allow them to do so. This is because that water is filled with lead which is only favorable to eucalyptus trees. Lead toxicity causes inhibition of adenosine triphosphate production, liquid peroxidation and DNA damage by over production of reactive oxygen species. It strongly inhibits seed germination, root elongation, seedling development, plant growth transpiration, chlorophyll production, water and protein content. Due to all these factors the only time he allows them to use it is when it rains and the water is brown in color not black.

With the commendable work that they do you’d think that the whole community would be fully behind them offering their unwavering support. Turns out not everyone is impressed. “We are facing a lot of opposition from some community members” says Shem, as he points at an old woman who is staring at us. “Together with others they are frustrating our efforts. They release their goats to feed on our trees. As you can see the trees on the right side all have nets and are somehow stagnant for not getting enough sunlight. On the left they are big and stable enough. These people are well connected politically and don’t want us to plant trees. In fact some have even built houses on the spaces that we’ve cleared!” he sighs. 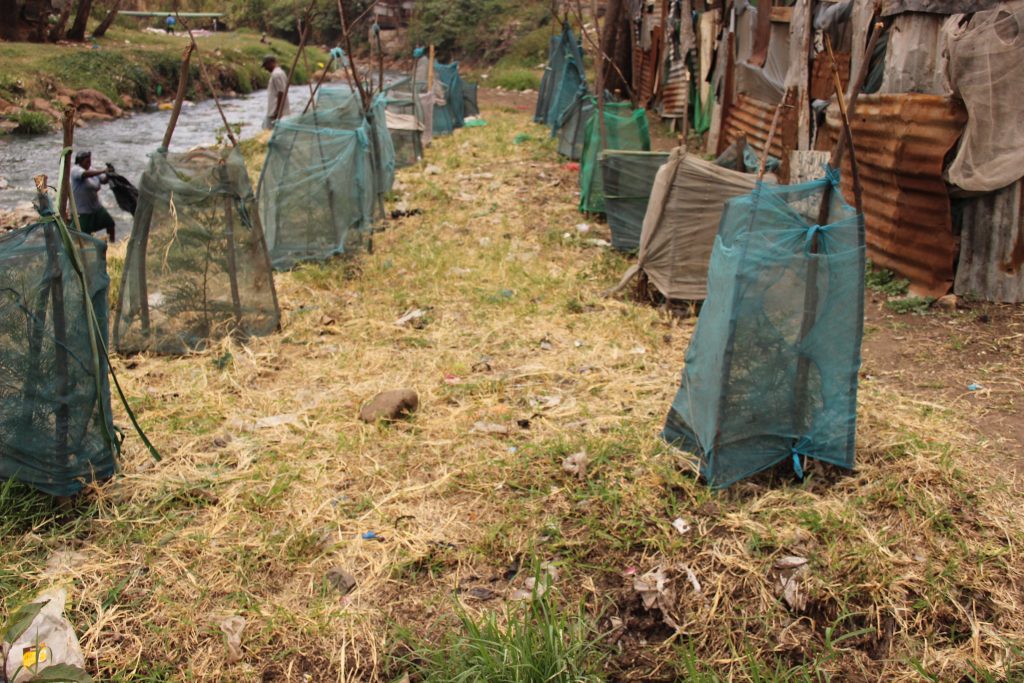 “These old people are fragile and cannot get confrontational. They choose to let it go. All we ask for is help from the local administration. As a young person in this group I feel terrible when I see some few members of the community unwilling to embrace change. The effects of climate change are real and these trees are for their own benefit. We must take action against climate change.” At this point I can’t stop thinking why this community is turning against these men. Where are the environmental activist? Why it is that organizations are looking down upon this old men? Even they deserve funding not just youth and women. They have demonstrated that they are worth it through their actions.