Many people usually go into politics for the money and the power. Next year there will be elections in Kenya and our hope is that a new breed of politicians will emerge, those who will work for the benefit of the electorate. One of them might possibly be Saadia Rao. Thanks to her selfless acts, people have been encouraging her to stand for an elective seat. This is because they believe that she can make a positive difference. She talked to Vice Versa Global’s Cynthia Omondi.

In Mtondia Kilifi County, I met up with Saadia Rao Ali, the forty five year old mother of four. She is Somali but having been born and raised in Kilifi, she is more of a Mijikenda than a Somali. Her fluency in the Giriama language amazed me and the kind of love that people accord her in this area is out of this world. She is fondly referred to as ‘mathee’ (slang for mother), since she has become one to many of them. “She has helped so many people around here, and I don’t mean just the financial help. She gives us pieces of advice and guides us to take the right path of life especially as the youth,” Salim, one of the motorbike taxi drivers we met in Mtondia town center told me. So, how did she find herself in the political setting and what is the motivation behind her great value for humanity?

Dropping Out of School

Saadia was among the lucky few whose parents valued education. She was taken to school at a time when girls were being discriminated against and denied the right to education in this region. She successfully cleared her primary education and joined Kilifi Township for her secondary education. Sadly while in form two, at sixteen years by then, she became pregnant. This is where the rain started beating her. “I was lured so easily. Up to date, I still don’t believe that chips and body lotion cost me my dream of becoming a journalist. Life was tough back then and when this man offered me body lotion, I felt like I was on top of the world. He would buy me chips and within no time I was carrying his child. Can you imagine? Chips and body lotion!” She said as she burst into laughter. As funny as it sounds, this is how most girls get lured. She uses her personal experience to enlighten young girls not to fall prey to such traps. Teen pregnancy has become so rampant lately and as a victim, she understands the repercussions and believes that her experience will be a lesson to many.

She witnessed the man responsible for her pregnancy walk down the aisle with another woman while she was expectant. “He openly disowned the pregnancy despite him being known by my parents and there was nothing I could do. I was very hurt and confused but I thank God I had a very supportive mother. I carried my pregnancy to term and gave birth to a baby boy. Two to three months later, we realized that my baby was both deaf and dumb. He was a special child due to this disability and to be honest, it left me distressed. All the same, I slowly embraced this fact and I developed a strong attachment to him that I refused to go back to school. I felt that he needed a special care that only I could offer. This brought conflict between my father and me. As a result, the worst happened. I was chased away from home!” She narrated sorrowfully.

Luckily, she found refuge in a Good Samaritan’s home, the mother to a former schoolmate of hers. She was crushed by guilt and a feeling of overwhelming responsibility at a very tender age. “I did not believe the kindness of that woman. She accepted me with open arms and this act of kindness is still engraved in my heart to date,” she remarked. She points out how her life was rife with difficult moments as she struggled to make ends meet.

Not only did she suffer as a single mother, but also as a married woman. Marital conflicts became the order of the day from the very first man she met. Coming from a family of staunch Muslims, Saadia ‘committed the crime’ of falling in love with a non-Muslim. According to her religion this is taboo, and so it led to the rift between her and her father widening even more. “I tried making peace with my father. However, after he learnt about the man that I was seeing, he went as far as casting a spell on me. He swore to never give me his blessings until the time that I would get a married to a Muslim man,” she said.

Peace is the way out of inequity and violence. It is a golden ticket to enter a new, brighter future for humankind. Peace is what Saadia needed and as she tried to find it, especially with her father, she unknowingly jumped out of the frying pan into the fire. Out of desperation to get married to a Muslim, she ended up with a criminal for a husband. As a result, she had to persevere years of domestic violence. “I really suffered in silence since I am one person who does not like sharing my problems with others. This man was a real criminal yet I didn’t know. We were blessed with three children together. As the bread winner most of the time, this meant I had to struggle more since I now had more mouths to feed. When the suffering became unbearable I opted out and took all the children with me. I’m thankful that God sent me a white man who liked my firstborn son, in part due to his special nature, and offered to help me. I came to learn later on that the father of my three children had been convicted of murder. What if I was still married to him?” she asked rhetorically. 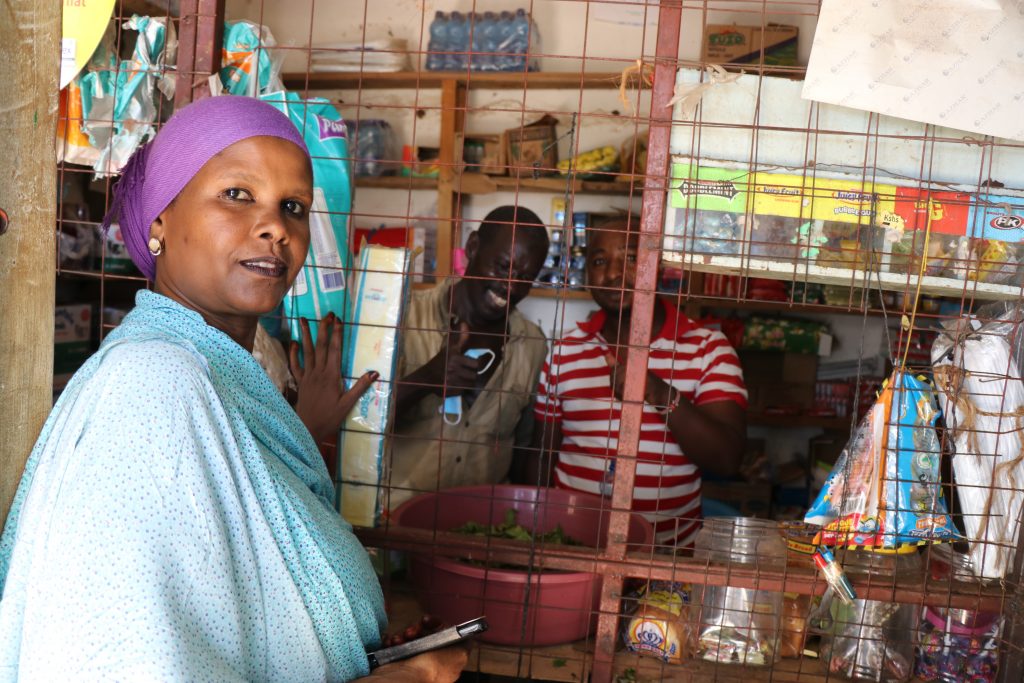 Saadia managed to stabilize her affairs after the support she received from the white man who simply adored her firstborn son.  Several years later and she has become so successful that she owns her own home. The chronology of the sufferings that she went through and how total strangers came to her rescue and changed the narrative of her life made her view life differently. She never wishes to see anyone suffer the way she suffered. “I have grown to accommodate anyone and everyone. I mingle with people of all kind and I don’t know how to say no to a genuine request of need. My assistance has been extended even to the courts of law. Once in a while I would be called upon to interpret for some Somali convicts. They were often charged here at that time and my ‘expertise’ would be employed. I have also done the same for the Giriamas and that’s probably why they’ve taken me in as one of their own. It’s not that I have money, but the little I have I’ve always learnt to share,” she affirms.

“I have helped countless number of people but the one that stands out for me was when I helped my house help to get treatment. She was suffering from fibroids and as a result, for years she had a swollen belly which people believed was as a result of being bewitched. She had suffered for close to thirteen years with no hope of getting cured. I took her to the hospital, catered for all the bills, and nursed her in my house for three months until she was able to stand on her own feet. It was viewed as an unbelievable act of generosity and it quickly became the talk of this community. My popularity soared from that simple act and that is how they began suggesting that I should consider vying for a political seat. According to the people around here, if I could do this from my own pocket then I could definitely do more if I had a government’s machinery behind me,” she explained excitedly.

At first, these were just empty talk but as time went by, Saadia felt the pressure mounting beyond her expectation. “I had never imagined myself as a political leader. Yet many people aired their views on how I could help transform lives. When asked about my thoughts I would go silent since I was embarrassed to admit that I was a school dropout and therefore I couldn’t run for any elective post,” she told me.

Saadia resolved to seek guidance from a few of her friends after opening up to them. “Everyone around seemed to believe in me. They advised me to go back to school and clear my secondary education and get the Kenya Certificate of Secondary Education after seeing the great potential I had,” she said. In a year where we have witnessed many women rise to power, Saadia must have gotten enough motivation.

She bowed to pressure and enrolled as an adult learner. She sat for her Kenya Certificate of Secondary Education this year and scored a D-. She is proud of this great achievement since it took sleepless nights for her to make the tough decision of going back to school. She is now looking forward to joining a computer college in order to gain computer skills.

It is now clear that Saadia is a political aspirant; however she does not have any coalition just yet. She decided to heed the call from her supporters who have given her so much confidence. But the question is, will they vote for her when the time comes? She doesn’t have the financial muscle to offer handouts or bribes; all she has is the trust from the people who have pushed her so much to venture into something she never imagined herself doing. As we keep wondering whether real leaders are born or made, Saadia was undoubtedly made.

From bodaboda riders, to widows, shopkeepers and even local brew dens, ‘mathee’ is well known. We walked around Mtondia town Centre and it was so evident. “Saadia is God sent; she guided me to come up with a women group for the widows around this area. She has been supportive since the inception of the group and I’m proud to say that we are making progressive steps.  We have started with small scale chicken farming and we hope to make it bigger someday as we strive to better our lives,” Umi, one of her advisory beneficiaries told me as she took us through their project.

A tree is known by its fruit; a man by his deeds. A good deed is never lost; he who sows courtesy reaps friendship, and he who plants kindness gathers love. We hope that Saadia’s good deeds will remain significant even after politics; nonetheless we wish her the best in her political journey.  We also hope that someday, citizens will learn to elect leaders based on their characters and not handouts.