On the second part of our three part series on Rusinga Island Vice Versa Global talks to Tom Mboya, the programs director at Victoria Friendly Montessori. Having dropped out of school due to a myriad of issues, he sought to make things better for future generations. His dream of providing quality education to the less privileged children on the island has had a spiralling effect, touching on many other aspects.

A boat ride across the vast Lake Victoria is the most enjoyable way to get to Rusinga Island, one of the many islands that lie east of the water body. We got a chance to spend three nights within the island, enjoying a deeply lighted expanse every night, that of the fishermen lanterns. This is a strategy that they use to attract fish to their nets. 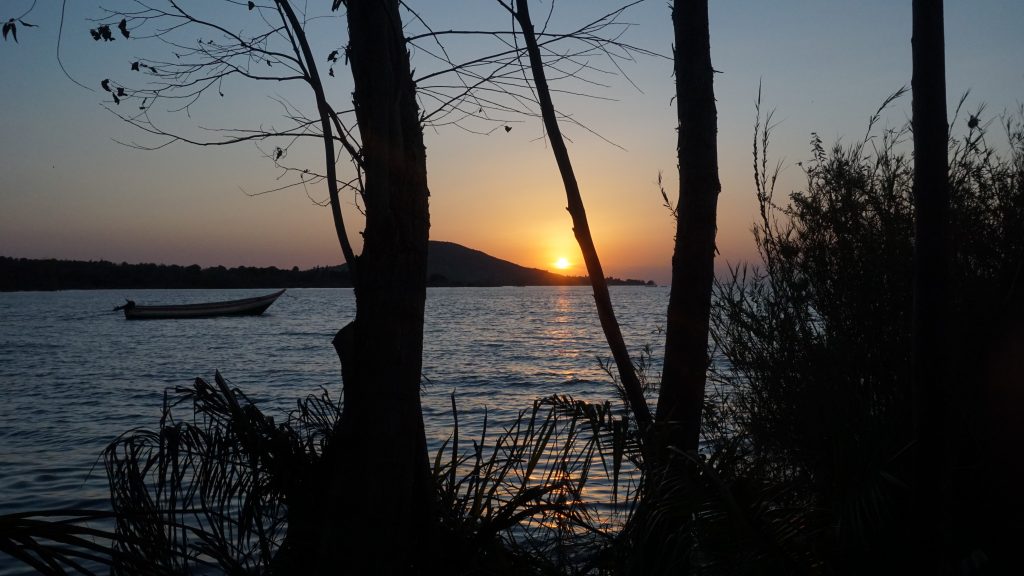 From a far, the lanterns light up the horizon of the lake so brightly you would think it is a city. But despite the fishermen’s dusk to dawn efforts fishing is no longer economically viable, nor sustainable, to feed the ever growing populace of roughly 35000 people.

In a community that has believed for years that agriculture is far from possible on the island, Victoria Friendly Montessori, a community led organisation has been working tirelessly to change this narrative. Change can only come from an empowered community and the organisation has been an embodiment of this phrase since its inception in 2014. It has used its 7 pillars as a blueprint to sustainably address the most prominent issues within the island, as well as involving the community in being part and parcel of their own transformation. So, how are they  doing this? To find the answers we set off to Victoria Friendly Montessori School where their office is located. The school was founded by the organisation to support needy students in their pursuit of education. It has been heaven on earth for the 300 students lucky enough to walk in every morning. Their seven pillars are heavily engrained on the school gate, one of them being provision of primary education.

As soon as we walk into the school, successive waves of laughter met our ears. Children pacing after each other around the school compound with others seated on the benches engaging each heartily. With this I clearly gathered their session was on a break. A majority of them have been saved from the claws of child labour and poverty along the beaches of the island. This has been a rampant phenomenon for children born in polygamous households, which leaves them vulnerable when their parent’s age can no longer fend for them. However the greatest contributor has been the alarming rate of HIV and AIDS infections. It has wreaked havoc in the recent past on the island by being the leading cause of mortality. The most affected have been children who, when their parents die, are left impoverished and stigmatised. They are left with no option but to try and eke out a living on the streets or in other potentially dangerous places.

“Education is not as basic as most tend to think but this is something we have vowed to make a thing of the past in our community,” Tom Mboya Adhiambo, programs director at Victoria Friendly Montessori begins. Like many children on Rusinga Island, forty year old Tom was born into a polygamous household. He is the first born son to the last wife of his father, a pump attendant who had already retired when Tom was still very young. All his father’s time, energy and resources had been given to his older families, leaving their household with the bare minimum. It is a common occurrence to find most children, born within polygamous family units or those affected by HIV/AIDS, have no option but to take on adult roles. This is because the most able guardian often fails to meet the family obligations. This was the same case for Tom.

At a very tender age, he had to take over the mandate of breadwinner for their household when he had no option but to leave school and work as a fisherman. This revealed to him the reality of so many other children living hand to mouth at the lake. He had a dream of living in a child oppression free island, where education and the basic survival needs for children could be met. After struggling to finish school, he dedicated most of his time trying to help the children at the lake. In 2011 he was introduced to Harry Oostrom, a philanthropic Dutch donor who for more than 30 years has dedicated his time and resources supporting such causes in Kenya. He was deeply moved by Tom’s story and passion to deliver the children at the lake and so many others from the deplorable conditions. “When he offered to help co-create a school that would harbour these children and cater for all their needs, I was really happy. I knew children would no longer get paid 10 shillings to buy mandazi after a whole day of looking after omena and chasing away scavenging birds from the drying fish. What I hadn’t envisioned is this holistic transformation of my passion to make education accessible,” he concludes.

As we walked around the village of Kamasengre North, one of the divisions on the island, the vast banana plantations would convince anyone that this is a farming community. Nelly Owuor, the programs coordinator, has worked within the organisation for 5 years, told us that the transition hadn’t been easy. “The lake has always been the end all and be all for the community. But after observing how some children used to report to school in the morning hungry, it was clear that there was a food problem within the community. So, how else could we achieve an all-round impact in the lives of these children if they still lacked the basic of necessities at home? We had to introduce alternatives means to secure food for the people in the community aside from fishing,” she mentioned.

Food security is another of their 7 pillars. When they started the food security program, the aim was to capacitate the parents or caregivers provide for their children when they came back from school. “Our efforts were significantly hurdled by a lot of stereotype for this had never been done before. We had to practise what we were preaching. So, we started farming within the school in order for the community members to realise that it was doable. When the community started picking it up, we trained them in groups on the most basic concepts. This included how to cultivate vegetables and giving them water tanks. This would ensure that they have extra income to meet other needs,” she said.

When we met Julieta Akinyi, a beneficiary of the community empowerment programme, she was busy tilling her kitchen garden. The first thing I realised when I walked through her wooden gate was a stalk of bananas on one of the many banana trees in her shamba. The mother of three, who was previously a fish monger, has been an inspiration to so many other women on Rusinga who are delving into agriculture. She has also been trained on weaving and poultry keeping with her children attending Victoria Friendly Montessori School. “My life has tremendously changed since I joined this foundation for capacity building. And it’s not just me that has been impacted but so many other vulnerable individuals in the community, especially women,” she told me. The passion with which she talks about the foundation is astounding.

She added a few words that still linger on my mind to date. “If you really want to help someone, teach them how to fish, don’t give them the fish.” This is what Victoria Friendly Montessori has been practising through the help of social workers who are keen on following up with the beneficiaries of the programs. Their impact has been unmatched since they also break the stereotypes that could potentially backtrack their progress. “I really enjoy cooking my home-grown vegetables as well as selling them. I am now able to save a lot of money and don’t have to be financially dependent on my husband as compared to before when I used to ask for everything. My household is empowered,” she concluded.

Victoria Friendly Montessori realised that they could do so much more for the community. Their blue print on achieving a self-sufficient community is anchored on 7 pillars; provision of primary education, water sanitation, hygiene, socio-economic development, health services, environmental conservation and food security. They have used their community empowerment programmes to resolve differences and iron out inequalities within the island. Women have been the greatest beneficiaries since they’re no longer susceptible to fishermen who ask for sexual favours in exchange for fish. Most of those who were fish mongers, just like Julieta Akinyi, are trading their agricultural produce to provide for their families and to sustain themselves. Children from the most vulnerable backgrounds are no longer being exploited for cheap labour nor do they have to drop out school. Now, they are also able to access quality education.  Tom is calling on other organisations to follow in their footsteps and create self-sustainable communities so as to eradicate the dependency culture.

“Giving handouts never add value to the community yet it’s the system that most organisations still operate under. They don’t start initiatives that will equip their beneficiaries with the skill set to become independent. By doing so, they impoverish them even more by creating and sustaining a culture of reliance, as well as deny them possibilities of innovation. A person who is empowered becomes innovative, depending on circumstances, and will think of ways to improve on whatever small they have,” he says. “Our greatest achievement is that institutions are coming to bench mark with us,” Tom mentions proudly. “They want to learn how we carry out our programs. I remember when one Member of Parliament asked where we learned to be so effective. This is because whatever we have done is something that has never been achieved.”

Tom Mboya envisions a changed community that can work together to steer its own development. He believes that together, they can work towards the alleviation of poverty. In doing so they will also create a community where children are treated justly and equally because they are the leaders of tomorrow. He vehemently adds that recognising them now will make all the difference.