As chairperson of the water committee, Annet Ithungu is one of the leaders in her village. Her ambitions used to be very modest, but now she motivates other women in her community and reaches far and wide. “I show them that a woman can lead an organisation and it’s possible to have a positive impact without the involvement of men.”

The Rwenzori Mountains sparkle in the sun – the nickname Mountains of the Moon is well chosen. We are in western Uganda, not far from the border with Congo, in the village of Karugaya. It has seven hundred inhabitants, spread over about a hundred households. The surface is large: “All the way behind that hill,” says Annet Ithungu, pointing her index finger in the distance. We are welcomed by her and the three other members of the water users’ committee. The local driver is also present. Our visit has a reason: there was a problem in the village but now there is a solution, with Ithungu playing a crucial role as the chairperson of the committee.

As we walk through part of the village, she talks about the composition of the community: “Most people are farmers, with coffee as the main product – every household has coffee bushes. Additionally, beans, potatoes, cassava and yams are grown. The basic food is cassava and Irish potatoes. Matoke (the plantain that is eaten almost daily in most of Uganda, ed.) hardly occurs here because the soil’s composition is not favourable. People also rear animals, such as goats and chickens. Most of them have lived here for a long time since it is their ancestral land.”

During this time of uneven rainfall, it is absolutely crucial to have access to water to drink, wash, and water the land. The households are all dependent on one natural water source. She tells us that everyone has the same right to water. “You can use as much as you want, the source provides enough.” Enough water does not mean that it is also clean water. When we reach the source, she says that until two years ago, there was no supervision. Therefore, people would wash their clothes here and animals would also pee in it. “We suffered a lot from typhoid, worms and other water-related diseases.”

In 2020, the village was visited by JESE, a local development organisation from Western Uganda that works with Simavi. We are joined by Richard Alituha from the organisation. With his motorcycle, he has been travelling to remote villages nearly every day, talking to people about how they can improve their living conditions. As part of the agreement, JESE always pays part of the costs. However, the villagers also make a substantial contribution, just as happened to the water source in Karugaya, which the joint effort has given a huge makeover. Alituha looks satisfied. There is also a sturdy bridge at the water source, which now connects the two parts of the village much more easily.

“When I first came here,” he says, “I almost couldn’t pass here. It was slippery and very dangerous, especially for pregnant women. It was tough to be picked up by an ambulance to go to the hospital. The bridge has also helped to increase income. In addition, crops can be picked up by trucks much more easily.” Above all, he is satisfied with the water committee of Karugaya and with its composition of three women and one man. “The relationships between men and women have traditionally been very old-fashioned,” he says. “Access to water, for example, was seen as a man’s business. There are some men who always think: how can a woman give commands and make decisions? That is why we want to tell many stories about women who are doing well in our projects. For example, the water committee in Karugaya and the task that Annet fulfils in the community.”

Annet Ithungu laughs. “Our motto is: what men can do; women can do much better.” Alituha nods. “Not only here, but also in other villages, it is our experience that women are more loyal and involved when they commit to something.” As in other villages, JESE has also provided training in gender equality and social inclusion in Karugaya. “That was desperately needed because the women do most of the work in the fields, yet the men take the lion’s share of the proceeds. The women, meanwhile, manage the money and even go to markets with their products.”

At the beginning, only a few men came to the training. “The discussion about what was being conversed started to slowly spread through the village like an oil slick,” says Alituha. “They walked away with meaningful stories, and that’s when I realised that telling stories is so important.” Ithungu and Alituha clearly enjoy reminiscing about old memories. “In the beginning, the debate was heated because some men only wanted to be the boss,” says Ithungu.

“Indeed,” Alituha responds, “the behaviour change certainly did not happen in one day…” “Richard already said that a positive approach is imperative,” Ithungu continues. “You have to show men that it is also to their advantage to involve women more. This is because they can do other things, such as look for school fees for their children. To build a healthy community, it is a necessity that women participate.” And that is what Ithungu does as chairman of the water committee. We take a seat under the shady coffee bushes to talk to her further. She has her youngest daughter on her lap, Beyoncé, named after her favourite singer. She has six other children.

Before leaving, Alituha praises her: “This community truly believes in her; She has the zeal and enthusiasm to bring improvement here. A water committee was formed by the community itself, which selects the most reliable and committed residents as its leaders. There are two leaders in the village: the politicians and the chairman of the water committee, from the community. The two complement each other well. She has real leadership qualities and the patience to deal with people and solve problems.”

She lets the compliments come over her with a smile and repeats the story she has already told: of how there used to be many diseases around the water source due to the dirty water; how the community, together with JESE, ‘rehabilitated’ the well and how she then participated as a resident of the village. “You will always find me at the well.”

The community unanimously nominated her as chairperson of the committee, though she had initially discussed it with her husband. “He also thought it was a terrific idea and has always supported me,” she says. “He still encourages me and also sees that the water committee has a positive impact on our family – our children haven’t been sick for a long time.” She also thinks it is logical that there are more women than men on the committee. ‘They use more water than men. Who cooks for and cleans the children? Who washes the clothes? That is why women always look at how the water is doing; they are more likely to notice a change in the weather pattern, signs of pollution, or if there are other problems around the water source.” 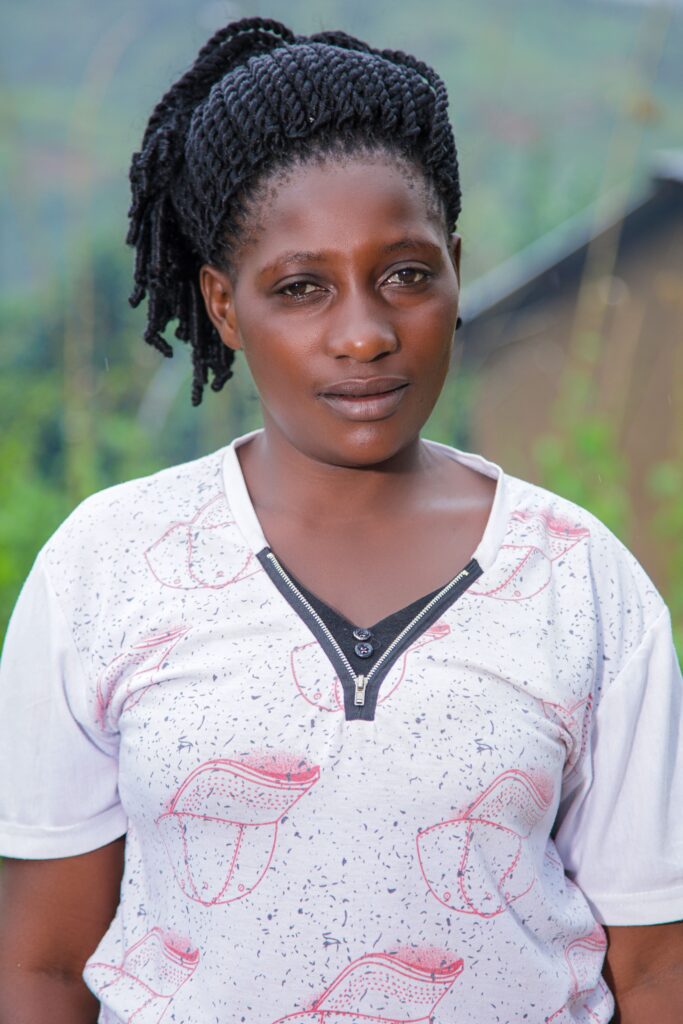 Ithungu gives substance to the presidency in her own distinctive style. She mobilises people for meetings and has started a savings group, for a fund, from which they can pay for repairs to the water source. Each household deposits a thousand shillings per month (25 Eurocents). In addition, she also acts as a kind of law enforcement officer: whoever commits a violation around the water source gets a fine of twenty to thirty thousand shillings. For example, if you wash clothes at the source or let cattle drink or your children urinate in there. In any case, children under twelve years are not allowed to stay there. “People who can’t or don’t want to pay the fine,” she says, “get an alternative punishment, such as digging or sweeping the site of the source.”

One of the challenges is climate change. Together with the government, she and her fellow villagers are planning on planting more trees. Between July and August, it hardly rained in the area and the flow from the water source was also smaller. “Then pollution is always lurking,” she says. “A hard current ensures that chemicals are also flushed out of the source and drift away. Water-related diseases occur mainly in dry periods. We sometimes have to use water for the irrigation of our crops, whereas in the past rainwater was always enough.”

She also says she enjoys her position and reflects on it. “My biggest ambition is that our village will be better. I have also started to see myself more and more as a leader and I can motivate other women through what I do. I show them that a woman can lead an organisation and that you can make a positive impact without the involvement of men.” Well, “except for him,” she says with a smile when she points to the only male member of the committee: Ezra Bulemu, who as secretary takes the minutes of the meetings.

He immediately responds: “I don’t worry for a moment that I’m the only man, because women always know exactly what they’re doing.” He adds: “When women talk about work, they mean business. They are so hardworking which is very motivating.” According to Ithungu, the presidency has contributed to her development. “I learn from it every day, such as that people automatically love you if you lead well. I was very shy before I started. A few years ago I would never have dared to sit across from you for an interview. However, I can speak to an entire village without nerves and make decisions on behalf of the whole community.”

For the next three years, she will be the chairperson of the water committee, after that Annette Ithungu wants to step up. “The times when women were overlooked when filling key positions are now thankfully over,” she says. “I see women doing well everywhere in the region. It is also something I aspire to. In a few years, I would like to become a leader at a higher level. My experience now allows me to also apply for a position in politics.”