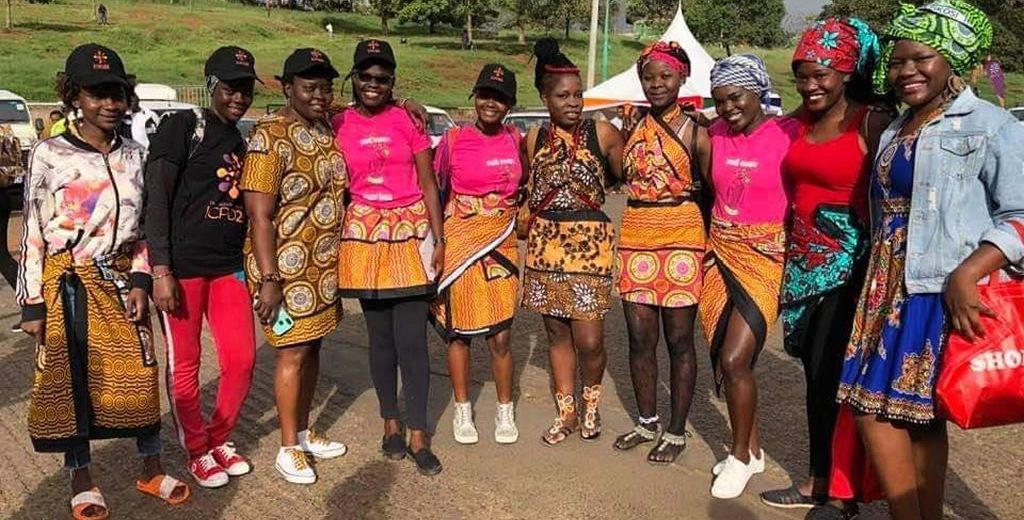 As we celebrate International Women’s Day, Vice Versa Global celebrates three women who have gone an extra mile sacrificing time, energy and even using there own recources to cure problems being faced by women in their communities. Our reporter Nicera Wanjiru had a talk with Florence Adhiambo, Sarah Dafar and Zelpha Ingasiah. All from different informal settlements but driven by passion to change the situations women face. Little is know about these women.

I couldn’t wait to get to Mathare and meet up with Florence Adhiambo, founder of Face of Girls, for a routine morning meeting with girls from her community. Little is known about her outside Mathare, aside from her nickname ‘Sema Nami’, Swahili for talk to me. After the pleasantries it is down to business. “I slept with a man, because I needed a sanitary towel. My step mother never cared if I use blankets or clothes during my monthly period”, one says. “I almost got raped by the boda boda guy who used to buy me pads because I refused to have sex with him”, another one chimes in.

This is a normal occurrence for girls in informal settlements. So that the girls can talk freely without fear of any repercussions, no men are allowed into their sessions. This is a safe space for the girls to tell their experiences and stories and to try and find a solution. Other challenges they face are lack of fees which force them to drop out of school, early marriages, harassment, violence, rape and human trafficking.

Apparently these girls, some as young as fifteen years, are lured out of the country with the promise of well-paying jobs. Of course this is never the case and most of them end up turning to prostitution to earn a living. At Face of Girls Foundation, they empower young women from the ages of 9 to 19 years. To restore the girls’ dignity, Florence together with her team have to dig deep into their pockets. When they are lucky, they get well-wishers who sponsor them with sanitary towels to give out to girls. She adds that it’s their responsibility to see that the girls at their organization can comfortably attend school without missing classes.

of sanitary towels. Efforts by the Kenyan Government to provide free sanitary pads to school going girls hasn’t been as effective. Her passion is fuelled by the many girls who are facing numerous challenges. In her organization they rescue, give a listening ear, mentor and empower them.

For Florence, international women’s day is all about celebrating women regardless of age or status. It is a day for airing women issues and embracing each other.

She is the human resource manager at Feminist for Peace Rights and Justice Centre. It is based in Kibera and getting a sitting with her is not easy. Her work is very demanding as evidenced by the fact that barely 5 minutes ever pass by without hearing a knock on her door, or her phone ringing. She also accommodates victims of gender based violence  which she tells me is a very risky endeavor but she has no other option. A human rights activist and gender equality defender, her passion for what she does is unmatched and her courage unimaginable. She is a frequent person in hospital and court corridors as she seeks for justice to the victims of violence who have turned to her for help.

“It has never been easy, and it still isn’t”, she confesses. A single mother of three, she started helping out the vulnerable in the society long before she had an organization. This meant that she had to dig deep into her pocket to help out the victims. There were days when she would sleep hungry as she began to navigate through this new setup. Luckily for her, she had taken her kids to stay with her sister. She stopped going to work so as to fully focus on helping out victims of gender based violence.  So as to cut costs, she moved into a one room house which was more affordable. Here she would stay with the victims and help them through the healing process as they would wait for justice to be served.

Her work involves numerous challenges like threats from perpetrators, financial constraints and delays by the court process. Failure is not an option so she never gets tired of pushing on. Her lowest moments are when the perpetrators walk scot free. Another challenge is on new organizations that have come up of late. Sarah, who now doubles up as a mentor, says that most of them pretend to be advocates and defenders of gender based violence victims, yet they never respond to cases whenever they are called. Very few of them ever do so and this is a worrying trend.

Halfway through our interview she receives a phone call that there is a new case and she is urgently needed, which of course means that we have to cut it short. I request her if I can accompany her since I want to see first-hand how she manages to do all these and she obliges. “If I come across a victim within 72 hours of their ordeal, I take them to a hospital to undergo a thorough medical test. Post Exposure Profruxes tablets are what the victims are given to protect them against any venereal disease. If the perpetrator is someone staying near the victim, I have to look for a safe house”, she tells me as we make our way to where she’s been called. “That’s just the beginning of the process. After I’m certain the victim is safe and has gotten all documentation forms from the hospital and the necessary tests have been done, I proceed to the police station to report the case and I’m issued with an Occurrence Book number. I then file it. All this is important because I will need it in court.”

Not yet women’s day

“If the perpetrator is not arrested, I alert my fellow human rights defenders and we start searching for them. Whenever we find them, we make a public arrest and hand them to the police. You must keep following up by attending court hearings. At the same time we make sure the victim is in a good state mentally and getting counselled. At times we are successful in our arrest other times we are not, which really disheartens me”, she explains.

About 39 percent of women and girls in Kenya aged 15 and above have experienced physical violence, with approximately one in four experiencing such violence each year. Due to Covid-19, these numbers shot up. For those who have interacted with Sarah they refer to her as a voice of reason.

For Sarah unless all women who have suffered any form of gender based violence gets justice and are free it’s not yet International Women’s day.

Zelpha Ingasiah has been a community leader since 2011.  She has been at the fore front on matters peace building, education, governance, youth and women empowerment. She is a community organizer who also facilitates and mobilizes resources and community members to transform the community. She is also a community development specialist who has worked and volunteered in different capacities such as assistant researcher, research questions designer on issues of conflict, violence extremism and cohesion. In addition to this, she has been actively involved in concept development and implementation of community initiatives whose aim has been to counter and prevent radicalization and violent extremism of the youth.

The highlight of her mediation work was when she was able to bring moderate and radical clerics, who both had huge followings, to the same table and moderated a peace mediation talk. She’s a member of Uprising Youth Group, whose main aim is to reduce crime and social impact activities. The social impact activities include forming football teams and opening up car wash business. Those activities have greatly reduced the rate of crime in the area by up to 75% by some estimates. She started volunteering with Uprising Community Library as an untrained teacher and librarian. In Kenya Tuna Uwezo, a program funded by USAID to counter violent extremism, she was involved in content development, project designs and implementations at the community level.

It was during this time that she managed to visit the United States of America to share her experiences and lessons learnt on countering violent extremism through community driven initiatives. In the course of implementing activities for this project, she had been mapping the youth who are at risk of radicalization. She managed to secure training on skills they could use to create income generating ventures rather than fall prey to being recruited to extremist groups. Today some of the young people she has been involved with are earning and are out of risk. They can be able to provide for their families.

Zelpha has also helped in formation of three women groups in Majengo which are doing extremely well. Her best moments are when she recommends a project and she can feel and see the impact at the individual level and in the society. She has also been at the forefront during the Covid 19 pandemic on sensitization, mobilizing food stuff and hand washing stations.

Lack of appreciation from the society pulls her down though she’s quick to say she doesn’t do it for recognition or praise. Another low moment for her was when her mother fell sick and she wasn’t able to cater to her medical expenses. She had to seek help from friends to help her out.  She believes that women have a role to play in prevention of conflict, violence and extremism. Her parting short, “Leadership is like medication. Women have to come out in strong numbers to contest for leadership positions or just take lead roles in the community.”

For Zelpha, International Women’s Day is ‘celebrating women where we were, who we are and where we want to be